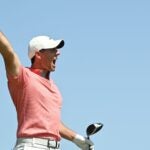 Rory McIlroy had another up-and-down day at the Open Championship.

I guess it’s not technically official just yet; McIlroy could shoot 55 on Sunday morning and make a decent run at the leaders. But it’s a fairly safe bet that the Northern Irishman’s major drought, which dates to 2014, will extend to an eighth year.

That doesn’t mean his Saturday morning round was without drama. There’s never a McIlroy Saturday round without drama. Especially at the Open Championship, where he joined bleary-eyed American A.M. viewers for breakfast, hours before the leaders got going.

He entered the day with a proper mindset: all in, without hope. Asked about his chances heading to the weekend 11 shots back of the lead, he acknowledged that it would take a special effort to get back in the tournament.

“Geez,” McIlroy said. “I know I need to go out and play really well tomorrow and then I need to pray for a bit of wind in the afternoon and see where that gets me. Right now I’m just trying to play my own game and not even look at the board, just try to play a good solid round of golf tomorrow.”

That was a sensible approach. And through nine holes on Saturday, it looked awfully special. Everything was going according to plan. Birdie at 1. Birdie at 4. Birdies at 6, 7, 9. He turned in four-under 31, four under for the tournament, the low round on the golf course. Around him, the course was firming up. Conditions seemed to be cooperating with his planned leaderboard ambush.

That’s the magic of McIlroy: Even when you know it doesn’t make logical sense, he makes you start to believe. To think things like, “Well, if he just shoots 29 on the back nine…” When he’s playing well, birdies look easy and more birdies feel inevitable. Could 63 be in play? 62? 61?

“I played great on the front nine,” McIlroy said after the round. “I hit some really good iron shots and converted some putts and really got it going.”

Playing partner Richard Bland was delighted by the crowd that followed.

“Playing with Rory, the crowd was fantastic,” he said. “They were cheering us on the whole way. The front nine, Rory was lighting it up a bit, so the crowd were really getting behind him.”

But for years at major championships, those stretches of easy brilliance have been interrupted by streaks of golf where McIlroy makes the game look suddenly complex. He powers a short putt through the break. He waves a wedge 20 yards short and right. His cut driver suddenly turns to a block. The double-cross lurks. Pars begin to feel like accomplishments.

That was the story as McIlroy turned to the back nine Saturday. At 10, he battled his way to a nifty par. At 11, he found the bunker, hit a terrific shot to four feet and yanked the putt straight through any potential break. Bogey. He just missed a good look at birdie on 12, and then missed the fairway at 13, hacked it out and made another bogey. At the par-5 14th, he chose iron off the tee but smothered it into the left rough.

If it’s frustrating to watch McIlroy through these stretches, we often forget that it must be that much harder to actually be McIlroy. Every now and then he reminds us of that, too. On 14, that frustration boiled over. After all that effort and all those birdies he suddenly seemed to realize that the round had slipped away and the tournament had, too. Now he’d even be deprived of the satisfaction of hitting a par-5 in two. He tomahawked his 2-iron, a cathartic left-handed hurl that we’ve only seen a few times from the mild-mannered McIlroy. It was tough to blame him.

When his par putt at the par-4 15th did a full 360-degree circle of the hole before lipping out, McIlroy could only offer a sardonic laugh. He had nothing else left. An hour later, after signing for a one-under 69, McIlroy spoke briefly to reporters. He’d had enough time post-club hurl to come to terms both with his round and with his position in the tournament.

“Sort of a tale of two nines,” he said simply. He acknowledged that the back nine had played tougher, the course had felt stretched longer and that the flags had felt suddenly tucked. “Certainly it felt like a better round than one under par.”

Of course, it wasn’t a better round than one under. It was a round of exactly one under. But it sure looked like it was going to be better.

It’s quite a while until April 7, 2022, when McIlroy will tee it up in his next major. But he was looking for positive momentum nonetheless. These guys tee it up more than four times a year, after all.

He won’t win, but McIlroy will have one more round at Royal St. George’s tomorrow. He’s T40. He’ll do his best to finish up a little better.