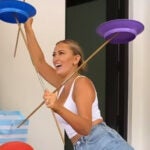 Paulina Gretzky at the party of the year

Hello friends, and welcome back to another edition of the Rogers Report. With the return of the LPGA, the American Express and the Abu Dhabi HSBC Championship, it was a busy week in golf. That’s good news, because it means it was also a busy week on golf social media. Let’s dive right in.

The best 7th birthday party ever?

DJ and Paulina’s oldest son, Tatum Gretzky Johnson, turned seven last week, and they went ALL out for his carnival-themed birthday party. When I say no detail was ignored, I mean it. There was a carousel, a ferris wheel, zoo animals, popcorn machines, magicians, carnival games and more. I don’t doubt that more planning went into this birthday party than some weddings. After seeing this, I can’t help but reflect upon my own seventh birthday party, which consisted of Dominos pizza, boxed cake that my little brother had a severe allergic reaction to and whatever Disney Channel movie happened to be on TV that night. Anyway, congrats to DJ and Paulina for not only being golf’s “it” couple, but for earning some serious street cred for Tatum in his elementary school class.

Brooks Koepka and Jena Sims got engaged back in March, and they wowed us with some images from their engagement shoot last week. Jena’s rocking the pantsuit, and Brooks cleaned up nicely — although I am a little nervous that one of them could’ve slipped on the snow. I definitely would have. Either way, this has me excited to see their wedding photos at some point in 2022!

The week of the angry golfer

Three different pros made the rounds on social media over the weekend for their frustration on the course. Let’s start with Thomas Pieters. During Round 3 of the Abu Dhabi HSBC Championship, Pieters was caught tossing up his middle finger.

We get it! Slow play can be so annoying. At least he looks comfortable. The best part of all? Pieters won the tournament the next day.

Next up is Tyrrell Hatton. Hatton also teed it up in the Abu Dhabi HSBC Championship at Yas Links. While he didn’t play as well as Pieters, he did express some frustration toward the course as well. Among his quotes about the course was the following: “I would love for a bomb to drop on it and blow it up to oblivion, to be honest.” Yikes!

And last but not least, we have Jon Rahm. We’ve documented Rahm’s behavior on the course before, and as the current World No. 1, it often becomes a point of discussion. So when a fan at the American Express caught this on camera, it set Golf Twitter aflame.

My coworker, Sean Zak, broke down the video here, but it doesn’t take an expert to know that saying ““Piece of s–t f—–g setup, putting-contest week” probably isn’t great. It’s a bummer because Rahm obviously didn’t intend for anyone to hear that, but with iPhones everywhere, it was bound to happen.

Side note: Rahm’s take might not be as unique as you think. In 1987, the pros petitioned the PGA Tour Commissioner to insist that PGA West didn’t host another event. Check it out:

For a while, I was afraid to admit that I often mixed up Harris English and Hudson Swafford. Were other people making this mistake? Did this make me less of a golf media member? I was relieved to find that the Swafford-English discourse goes back to at least 2014 online. And it’s not just your run-of-the-mill golf fans who get the two mixed up. In fact, the broadcasters did as well on Sunday.

Harris English wasn’t even in the field at the American Express, so this makes me feel a lot better. They’ve played together a few times on Tour, but Getty Images has thus far only recognized their practice rounds. Good luck to all of us if they’re ever facing off in the final group on a Sunday afternoon.

It’s always fun to see the pros try their hand at something other than golf, especially when said pro has a good sense of humor. Tommy Fleetwood and Viktor Hovland were perfect for this “back to school” exercise. And there’s something so, so great about Viktor Hovland getting his trivia answers from a little kid.