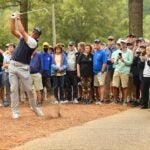 Phil Mickelson hits a shot on Friday on the 3rd hole at the Country Club of Virginia.

Phil Mickelson was off.

Then he said he was.

A couple of hours after marking himself down for a quadruple-bogey 9 for the second straight day on the 9th at the Country Club of Virginia, and three days after saying driving accuracy was irrelevant, and Phil Mickelson was reminded of both on Twitter soon after his play on Sunday at the Champions Tour’s Dominion Energy Charity Classic. From an iPhone, he responded about an hour and a half later.

“So a few days ago @PhilMickelson told us hitting fairways is irrelevant in Golf,” tweeted @WesClements22. “Last two days he took a 9 on par 5 finishing hole. Yes you guessed it, out of bounds. Golf Gods looking down on Phil saying , you said what? @GolfChannel”

To which Mickelson responded: “I probably was a bit off on that statement,” adding two laughing emojis.

A discussion of distance vs. accuracy would continue over a few more tweets, including one from the co-founder of a course management system whose concepts have been adopted by several PGA Tour pros. It all started on Thursday, when Mickelson said the CC of Virginia course would require him “to be a little bit more patient and manage my game a little bit better,” and a reporter noted that and asked: “Please correct me if I’m wrong, [but] your last win on this tour, you were 81st in driving accuracy, I think. I don’t know if I have that exactly correct, but would you get away with that here this week?”

To which Mickelson answered:

“So, I look at longest, like I try to hit it the farthest out here, and I was No. 1 in driving distance. That’s the way I look at it. If you want to look at stuff that’s irrelevant, have at it.

Which brings us to the 547-yard, par-5 9th and the Twitter commentary. During Saturday’s second round, Mickelson hit consecutive tee shots left and out of bounds and finished the hole four-over par. On Sunday, he made another nine. (The Champions Tour’s online leaderboard did not fully detail the hole, though it did show Mickelson hit two tee shots.) Mickelson first responded to @WesClements22, then Scott Fawcett, co-founder of DECADE golf, a course management system, jumped in.

Mickelson then explained himself further.

“My thinking is this,” he tweeted. “I want to win. I don’t care about any other finish.If I drive it long and am 30-50 yards past my opponent, I’m hitting a 9 or wedge to their 5 or 6.Over 3 rounds I will win that fight.If I drive crooked I will lose but I’d like to be in control of the outcome.”

Mickelson would tweet once more on the subject. In response to @WesClements22, @tmwwdej wrote: “He said fairways, and he’s right. Now, missing the entire golf course is entirely another thing…even Phil knows you can’t do that. And, he still is the reigning PGA champion. And he’s still 3 for 5 on the champions tour. And, he’s still the most popular golfer in the world.”

Replied Mickelson: “We should probably be friends.”