Who is Phil Mickelson’s caddie? 5 things to know about Tim Mickelson 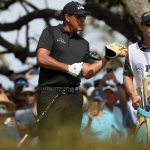 When it comes to the modern success of Phil Mickelson, he keeps it all in the family. That means employing his brother Tim as his caddie.

Phil Mickelson is headed into Sunday at the PGA Championship looking to add to his already impressive resume. It’s a position we’re used to seeing him in, but the man on the bag is not so familiar with carrying a bag while his man is in contention at one of the big ones.

While Mickelson won his five majors with Jim “Bones” Mackay by his side, this time around it’s his brother, Tim, who is his caddie. Here are five things to know about Tim Mickelson.

Prior to teaming up with his brother, Tim was the men’s golf coach at Arizona State. He had a successful run as head coach in Tempe from 2011 to 2016 and was the head man when the Sun Devils had Jon Rahm on the team (more on that later). Before his stint at Arizona State, Tim was the coach at the University of San Diego for eight years.

2. Before caddying, he was an agent

Four years ago, Phil was still playing with Bones on the bag. Jon Rahm, an up-and-coming talent on the PGA Tour was catching the eyes of many. His agent? Tim Mickelson. Mickelson served in the role of Rahm’s agent for about 17 months at Lagardère Sports. Since taking over the caddying gig Mickelson has backed off his agent gig, though Rahm stayed with the Lagardère brand.

3. He dabbled in pro golf

Phil isn’t the only one in the family to play on the PGA Tour. Tim played in the 1999 Buick Invitational, where he missed the cut. Tim also made one start on the Korn Ferry Tour (then the Buy.com Tour) in 2001 where he also missed the cut.

4. His dream foursome is different than yours

If Tim could pick any three other people to join him for a round, he’s going with president Abraham Lincoln, swimsuit model Kelly Rohrbach and physicist Isaac Newton. How’s that for a squad? No Phil, Arnie, Jack, Tiger or any other golf greats. Tim is learning some non-golf stuff while he’s dreaming with this group.

5. He and Phil are ambidextrous opposites