In an age of tricky race relations, we need more Harold Varners 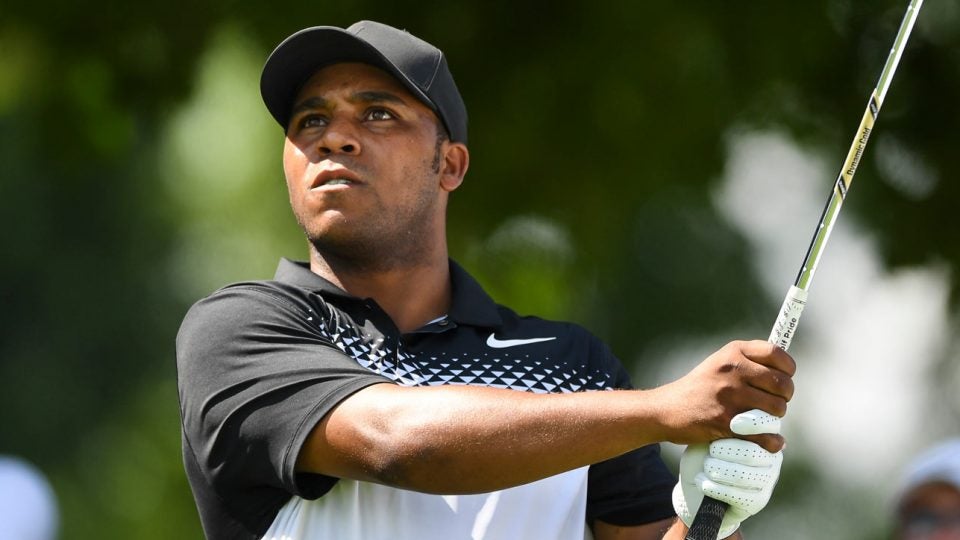 The PGA Tour, in my experience, has never been whiter. Forty or so years ago, there were a dozen or so black golfers on Tour. This year, at FedEx I, there were only two black players — Tiger and Harold Varner III — among the 119 golfers in the field.

HV3 told me I was looking at it the wrong way. “Every time you talk about race, you’re just making race more of a thing,” he said. He’s moved on. He looks at his touring brethren and sees no black golfers, no white golfers, no Asian golfers. Just golfers. He’d be at large in a post-racial society, if people would just let him. He’s 28.

We were sitting, after his fourth round, in a dining room at the Ridgewood Country Club, a club that was once…

Does it matter anymore? Two tables away was Harold’s girlfriend, Amanda Singleton, who is blonde and blue-eyed and…

Does it really matter? Harold grew up in Gastonia, outside Charlotte. Gastonia got its name from William Gaston, a distinguished 19th-century North Carolina judge with progressive (for the time) views about race. Harold got his name from his father, a car salesman, who introduced his basketball-loving son to the goff at Gastonia’s municipal course, where kids could play all summer long for $100.

RELATED: Harold Varner discusses life as a rookie on Tour

Varner III is a blast of fresh air. When our conversation turned to Jim Furyk, Harold said, “That’s my boy. He taught me how to buy a Mercedes. He said, ‘Find exactly what you want. Get a price. Then call every Mercedes dealer you can and find a better price.’ ”

A pale-green smoothie arrived for Harold. No charge, of course. Player Dining. Harold tipped the server generously. “It’s crazy,” he said. “The more money you make, the more free s— people want to give you.” He’s made about $3.3 million in three full seasons on Tour, starting in 2016, but he’s determined to get better. “I just played like crap, and I’ll finish like 40th,” Varner said. He and Ricky Barnes, winner of the 2002 U.S. Amateur and runner-up in the 2009 U.S. Open, used to have the same agent.

“We’re all as good as we want to be,” Varner said.

Harold has an incisive question for every person he meets. Earlier that day, he had played with Bubba Watson for the first time. He asked Bubba how a golfer could both be true to himself and conform to the narrow norms of the PGA Tour. “He said you can’t,” Harold said. “To play for the kind of money we play for, to get the kind of endorsement deals we want, you can’t rock the boat.”

But Harold is different, and it’s not a coincidence that he’s the only player on Tour with a head-to-toe deal with Michael Jordan’s clothing line. Harold looks great in it, youthful and fresh. He grew up on Jordan’s Charlotte Hornets and met the man once. He asked Jordan, “What did you do when you were struggling?” MJ said, “I relaxed and did my job.”

This year Varner played with Woods for the first time, in two practice rounds at the Players. “Tiger’s chill,” Harold said. “You can ask him anything.”

He once asked Woods, “What do you do under pressure?” Woods said, “You keep things simple and you don’t change a thing,” as Varner recalled it.

Early on that Sunday morn at Ridgewood, Varner cheekily parked in Tiger’s vaunted spot. Later that morning, when Varner walked by Woods on the practice tee, Woods said to him, “Did you get my text?” It was this: “That’s MY spot.”

Ohhh, Varner was scared! Hours later, as Woods talked to reporters, Varner stuck his head out a clubhouse window and said, “We love you, Tiger.” Tiger ignored him, or at least tried to.

Varner is about three wins away from becoming the ambassador golf needs. Not that you can just snap your fingers and get those W’s. This year he’s had three top-10s. It’s hard to get on Tour, hard to stay there, hard to win on it. Tiger has 80 Tour wins. Varner is looking for his first.

Remember Ty Tryon? On the eve of his first event with a Tour card, at the 2002 Phoenix Open, I flew to Sky Harbor and rented, of all things, a Jaguar from Hertz. (The last car on the lot.) Twenty minutes later, I was pulled over and told by two PPD officers to sit on the side of the road. It was cold and windy. I sat there for a half-hour and they wouldn’t let me talk. Turned out, the Jag had been stolen from Hertz and returned but never taken off the department’s master stolen-car list.

In the press tent the next day, I told Cliff Brown about my late-night adventure. Clifton Brown, gentleman sportswriter for the New York Times and the only black reporter on the national golf beat. Cliff listened sympathetically and said, “Better you than me.” That was then and then is now.