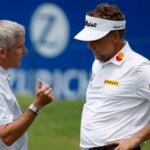 On Thursday, the PGA Tour made its move and suspended all golfers playing in the LIV Golf event from the PGA Tour.

The story of the PGA Tour’s relationship with the upstart, Saudi-funded LIV Golf Invitational Series is one of continued escalations. And on Thursday, tensions showed no sign of slowing down.

Until late last week, PGA Tour commissioner Jay Monahan was dealing largely with hypotheticals. In his press conference at the 2022 Players Championship he had hinted at disciplinary actions and rumored suspensions. Players took those threats seriously. They applied for releases to play in the LIV events that weren’t granted by the PGA Tour. Then, players such as Kevin Na and Dustin Johnson competing in the LIV event preemptively resigned their PGA Tour membership, attempting to exploit a loophole that might help them avoid disciplinary action.

Had the PGA Tour’s bluff been called? Had it even, perhaps, overplayed its hand? With most everyone unsure how firmly the Tour would respond, Monahan made the gutsiest call of his tenure: He went all in.

In a strongly worded statement sent to players that soon circulated on social media, the commissioner outlined sanctions against the defecting PGA Tour players and those who might do so in the future: Suspensions and ineligibility from all PGA Tour, Korn Ferry, PGA Tour Champions, Canada, and Latinoamerica events including the Presidents and FedEx Cup. Players will also not be permitted to play as non-members via sponsors exemptions either, the statement read, but left open the question of whether they could one day return.

“These players have made their choice for their own financial-based reasons,” the statement reads. “I know you are with us, and vice versa. Our partners are with us, too. The fact that your former TOUR colleagues can’t say the same should be telling.”

The first LIV golf event teed off on Thursday in London. The memo sent by Monahan also listed the names of the players suspended, although it did not mention Bryson DeChambeau or Patrick Reed, who have both reportedly joined the league for its next event. (DeChambeau’s agent confirmed the news regarding Bryson.)