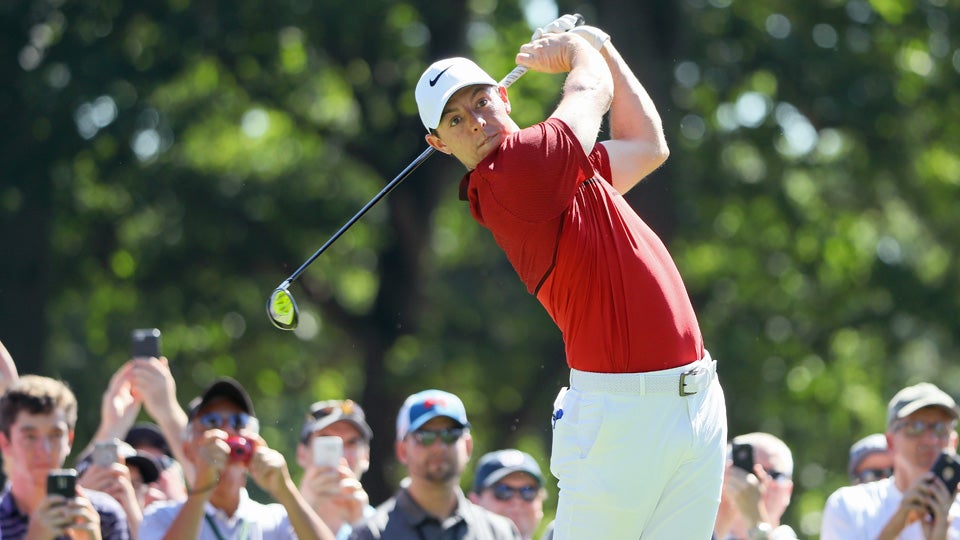 Rory McIlroy, teeing off during a PGA Championship practice round on Tuesday, has one last chance to win a major in 2016.
Getty Images

SPRINGFIELD, N.J. — Rory McIlroy’s stance on Olympic golf hasn’t wavered for some time: He would rather win majors than medals.

But this season he’s running out of time to do the former.

This week’s PGA Championship is McIlroy’s last chance this year to win his first major since 2014. Since he ripped off back-to-back major wins that year, he has fallen from No. 1 in the world ranking; busted up an ankle and missed a major (the 2015 British Open); lost a Saturday showdown against Jordan Spieth at the 2016 Masters; and watched other young stars ascend to his level.

But here he is, in a tournament in which he’s flourished, with a chance to claim his third PGA Championship title and completely overhaul an outlook of a season that’s produced more negative headlines — growing the game, Open club toss, skipping Rio — than good ones.

“Everything is straight out in front of you (at PGAs),” McIlroy said at his press conference at Baltusrol on Tuesday. “There’s no real hidden secrets to it. And I feel that’s what really let’s me excel. I feel like I can play my game in PGA Championships. I can hit driver off the tee most of the time, and from there, if I drive it well, I feel like I have a big advantage. It’s always been a tournament that’s set up well for me.” McIlroy needs a third PGA title for the hat trick. He stormed to an eight-stroke victory at Kiawah Island in 2012 and edged Phil Mickelson by one to win the 2014 edition at Valhalla, the last of his four major wins. His strong start to 2015 — fourth at the Masters, T-9 at the U.S. Open — was neutralized by a DNP at the British at St. Andrews. He followed that with a 17th-place finish at the PGA.

In his three majors of 2016, McIlroy bookended his missed cut at the U.S. Open with a T-10 at the Masters and a T-5 at the British Open at Royal Troon. At Troon two weeks ago, he wasn’t in the top 10 after any of the first three rounds but closed strong with four-under 67.

“I feel like I’m swinging it well,” McIlroy said. “Every aspect of my game, I’m very comfortable with. So you know, combine that with the layout of the golf course here, and I feel like this is my best chance this year to win a major.”

McIlroy, 27, has always been a storyline, and he always will be, but he’s in danger of blending in with the other top contenders. In 2014-15 he was ranked No. 1 for 21 straight weeks until Spieth replaced him at the top after winning the 2015 U.S. Open. Then the narrative moved to the Big Three, then to the Big Four (Rickie!), back to the Big Three and now back to the Big Four (DJ!). It’s expanding, not condensing. Much different than 18 months ago.

Based on the reaction from the galleries during his Tuesday practice round, there were times when McIlroy wasn’t even the favorite among his foursome (that can happen when you play with Fowler). But McIlroy still walks the fairway with that same bouncy swagger.

McIlroy’s other playing partners Tuesday were Jimmy Walker and Andy Sullivan. After McIlroy hit his approach on the par-4 13th, he handed Walker some cash, slipped under the ropes and called it a day. He met with the media about an hour later, calling his 2016 “neutral.”

“I feel there’s been times where I got a little bit of momentum and then sort of got set back a little bit,” he said. “It’s sort of been a little stop-start in a way. But it’s hard. I’m trying to stay as positive as I can. I feel like I am positive because my game is in good shape. But I guess just maybe running out of patience a little bit and trying to make it happen.”

Midway through his press conference, McIlroy was asked to grade his 2016 thus far.