PGA Championship 2019: Our staff’s picks to win and sleepers to watch

The 2019 PGA Championship is ready to kick off at Bethpage Black on Thursday morning. Here are our staff’s PGA expert picks to win and PGA sleepers to watch.

Jessica Marksbury, multimedia editor (@Jess_Marksbury): Brooks Koepka. The dude has either won or finished second in three of the last four majors, and he’s placed no worse than T13 in eight of the last nine he’s played. That’s remarkable. And thanks to this recent spat with Brandel Chamblee, he now has a new motivating chip on his shoulder. To top it all off, long and super-tough Bethpage Black just seems like a good fit for him. I’m all in on BK.

Josh Sens, contributor (@JoshSens): Koepka. For all the reasons Jess lays out. It all sets up for a striking contrast: a rowdy New York crowd going bonkers as Koepka goes about his stoic business, cutting the Black Course down to size.

Jonathan Wall, equipment editor (@jonathanrwall): Xander Schauffele. X is making a habit out of contending on golf’s biggest stage. He’s now finished T6 or better in three of his last four major starts following a runner-up showing at the Masters. I believe he’ll get a couple of major titles during his career. It starts this week at Bethpage.

Michael Bamberger, senior writer: Brooks Koepka. Best player in the world, and on hard courses only better. Long, wet course in breezy, cool conditions? No problem for this tough hombre.

Pat Ralph, associate editor (@Pat_Ralph): Brooks Koepka. Buy me a ticket on the Koepka bandwagon. He’s been playing his best on the biggest stages, and his game seems suited to survive and win at Bethpage. If Koepka can take care of business on the greens, the Wanamaker Trophy is his.

Sean Zak, associate editor (@sean_zak): Long, brutal course in the northeast? Dominated by driving and avoiding the rough? Everything is coming up Dustin Johnson for this one. WOW, Sean, the No. 1 player in the world? Yep! DJ gets out to a first-round lead with a 69. Adds to it each of the next two rounds. Then holds on for dear life on Sunday.

Alan Bastable, executive editor (@alan_bastable): Sergio! JK, Brooks. His last nine major finishes, beginning with the 2019 Masters, are just silly: T2-1-T39-1-T13-T6-1-T11-T4. Why would you stop betting against him now? Also, thanks to Chamblee, a chip the size of Long Island is squarely back on Brooks’s shoulder. He will be dangerous.

Jeff Ritter, digital development editor (@Jeff_Ritter): I might regret picking against Brooks or DJ, but I’ll go with Rickie Fowler to win this one. He has four top 10s in his last eight majors, and surely he’s going to remove himself from the “Best Without a Major” list soon…right? NYC fans love him, and maybe they’ll help carry him to a breakthrough title. 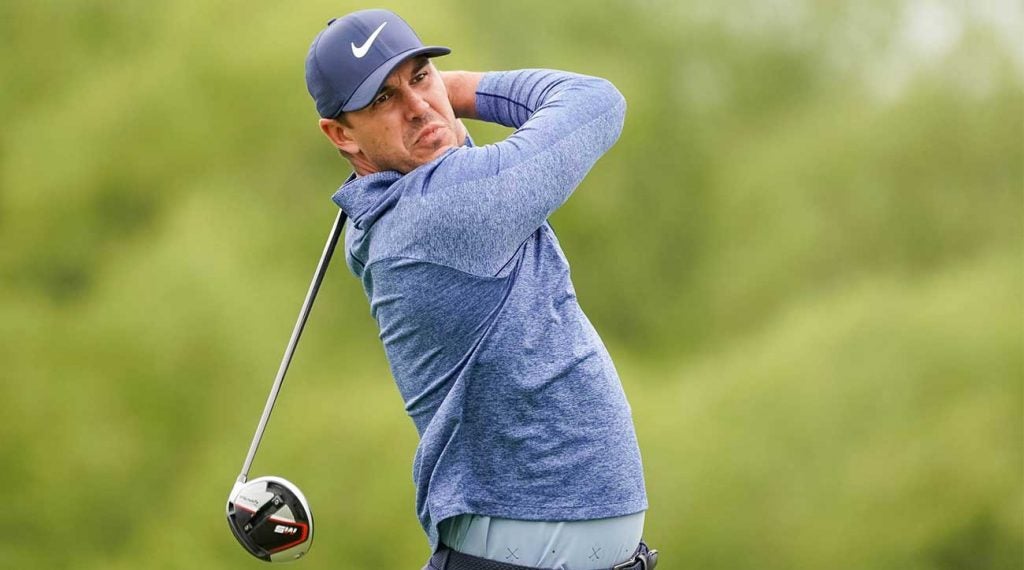 Brooks Koepka has been a popular pick to repeat as PGA champ.
USA Today

Dylan Dethier, associate editor (@Dylan_Dethier): Tiger Woods. I just don’t think there’s anyone better at managing a golf course. Bethpage will reward precision with irons and creativity around the greens, and it will also require players not beating themselves. Woods is back to being elite at all three of those, and I can’t shake the feeling that for one big event at a challenging golf course, he’s back to being at the top of the game.

Luke Kerr-Dineen, instruction editor (@LukeKerrDineen): Jason Day. I’m guessing this tournament will be a kind of U.S. Open-PGA Championship crossover event, which makes Jason Day the perfect pick. Day has an impressive slate of finishes on long and difficult U.S. Open courses (which will come in handy around Bethpage this week) and he’s a past champion of the PGA. A recent uptick in form coming into the event makes him a hard proposition to ignore.

Josh Berhow, senior editor (@Josh_Berhow): No need to get cute with this one. Brooks Koepka brings his best during major weeks and I have long thought this course sets up beautifully for him. Koepka wins major No. 4 on Sunday night.

Jessica Marksbury, multimedia editor (@Jess_Marksbury): Rob Labritz. Ever heard of him? You will! The club pro from GlenArbor has been prepping for this moment for years. He’s a three-time winner of the New York State Open, which is contested every year at the Black. He may have more competitive rounds there than anyone else in the field. I doubt there’s any player who knows the course better. We usually wonder if a club pro can even make the cut at the PGA, but this year, I’m looking at Labritz to contend.

Travel
PGA Championship 2019: 10 reasons why Bethpage Black is so hard

Josh Sens, contributor (@JoshSens): Lucas Bjerregaard. Not a ton of starts on Tour in his young career but he’s shown well on a number of big stages. A good week at Augusta. A strong weekend at the Players. And a win over Tiger in match play in Austin.

Jonathan Wall, equipment editor (@jonathanrwall): Max Homa. If he can stare down the competition and win at Quail Hollow — one of the toughest courses on Tour — I think he can replicate the feat at Bethpage. Homa plays with no fear, and you need that kind of swagger to win a major.

Pat Ralph, associate editor (@Pat_Ralph): Lucas Glover. Glover came out on top at Bethpage in the 2009 U.S. Open, the last time the course hosted a major championship. Plus, he’s got four top-10 finishes this season. Having that course knowledge and experience of winning at Bethpage could prove to be crucial.

Dylan Dethier, associate editor (@Dylan_Dethier): Louis Oosthuizen. He’s a top driver of the golf ball and has elite touch around the greens, and I loved his T2 at the Valspar, which is about as close as Florida gets to a major-type setup. (Take that, Sawgrass!) Like Woods, he hasn’t played since Augusta — making him extra sleepy. Value at 60-1.

Michael Bamberger, senior writer: Lucas Glover. Playing so well, good BPB vibes, overdo for a week where it all comes together. Plus, he’s a pleasure to root for.

Alan Bastable, executive editor (@alan_bastable): Sergio! Hey, a man can dream. And it’s not as outlandish a pick as it sounds. He’s coming in hot after a runner-up finish in New Orleans and a T4 in Charlotte.

Jeff Ritter, digital development editor (@Jeff_Ritter): Is Henrik Stenson a sleeper? (Checks odds, sees he’s 60-1, runs to the betting window.) His fairway-splitting 3-woods and steady iron game should play well. I like him for a top 5.

Luke Kerr-Dineen, instruction editor (@LukeKerrDineen): Lucas Glover. He’s been one of the low-key most consistent players on Tour this season. He’s clocked 11 top 15s in 15 starts with just three missed cuts. That’s the form of a guy who’s ready to win. And why not this week? After all, he was the dark horse who rode through a soggy Bethpage to capture the 2009 US Open.

Josh Berhow, senior editor (@Josh_Berhow): Justin Harding. You may remember him sneaking into the top 10 for the first three rounds of the 2019 Masters before tying for 12th. He’s coming off a top 10 at the AT&T Byron Nelson and could add another sneaky good finish at the PGA.

*Above are the odds of players who are 50/1 or better for this week’s PGA Championship. For the complete list of odds, click here.