Patrick Mahomes says this NFL star is the best golf buddy, by far 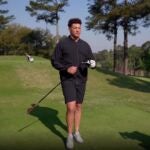 If you want a golf buddy who pumps it 350, hits four fairways at most and is a blast on the course, Patrick Mahomes has the NFL star for you.

Shortly before the beginning of the NFL season, Patrick Mahomes was on the cover of our magazine. Why? Because he has spent the last few years transforming into an absolute golf nut. Working rounds into his vacation plans. Chasing aces in Jim Nantz’s backyard. Hoofing 36 a day at Bandon Dunes. The NFL’s most dynamic quarterback grew up playing with his father and has rediscovered a love for the greatest game. When one of the coolest athletes in the world leans into golf as his passion, that’s a good thing for all involved.

Why golf? One of Mahomes’ favorite things about playing was the people with whom he gets to share the fairways. And it turns out that his favorite target on the football field is also his favorite fella to tee it up with.

As part of the cover shoot for the magazine issue, Mahomes joined us at Augusta Country Club for a quick edition of our recurring video series Tee to Green, where he played a hole — in this case, ACC’s 403-yard 17th — while I peppered him with questions. His answer to the question of best NFL playing partner was especially intriguing. And incredibly convincing.

“I don’t think you can beat Travis, dude,” he said. That’s Travis as in, Travis Kelce. No. 87. The NFL’s loudest tight end, both on the stat sheet and on the first tee. Mahomes continued. “Kelce, he’s just…I mean, he can play some good golf sometimes, but he’s just a joy to be around the whole entire time. He’s just always in good spirits, he hits some great, crazy shots and definitely just a fun guy to be around.”

Mahomes meant it. Directly after the shoot, Kelce and two other friends were meeting them for a round at Augusta Country Club. The next two days after that, they took in the action from Augusta National for the first two days of the Masters. And come July, they reunited for a memorable few days at Lake Tahoe for the American Century Championship, golf’s pre-eminent celebrity tournament, where they hit bombs, chugged light beers and generally delighted the crowd.

So who hits it farther off the tee, Mahomes or his tight end?

“Travis. I’m gonna say he’s only going to hit like four fairways on the day, maybe. But if he hits it down the middle it’s 350-plus, every single time.”

It’s no shocker that Kelce, a 6’5″, 260-lb athlete with fine motor skills, can pummel the hell out of a golf ball. But it’s mildly surprising that he can hit it past Mahomes, who carried one 347 yards at Lake Tahoe this year. (At elevation. And downhill. But still, carried it 347.)

“I’m sitting around 300-330 range. If I really got into one, maybe a little further,” Mahomes said. “But I…even though I swing super hard, I try to tone it down a little bit and keep it in play.”

You can read the entire cover story on Mahomes and his relationship with golf here.

And watch the rest of Tee to Green with Mahomes below (or on YouTube here) to hear him talk betting, Bandon, his best round ever and much more.