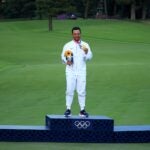 When C.T. Pan poured in a mid-range par putt on the fourth playoff hole at Kasumigaseki Country Club on Sunday, he locked down an Olympic bronze medal — the exact type of thing money can’t buy.

But he earned a whole bunch of money, too. More, in fact, than Xander Schauffele earned for winning gold.

Pan, who was competing for Chinese Taipei, entered the final round with an extremely outside chance at a medal. He’d shot 74 in the first round before rallying with 66 on Friday and 66 on Saturday, but now he needed an even lower round just to have a shot. But Pan birdied 1. He birdied 3. He birdied 6. By day’s end he’d logged six birdies and an eagle for a clean-sheet 63 and a four-round total of 15 under. The only player in the clubhouse with a lower score was Pan’s final-round playing partner Rory Sabbatini, who’d made 10 birdies and an eagle en route to 61.

“We actually had a very relaxed environment in my group. I had my wife on my bag caddieing for me and CT had his wife on the bag for him,” Sabbatini explained. “I had the privilege of playing with CT today, so we kind of spurred each other on and he played some fantastic golf.”

After they signed scorecards, Pan waited. He watched. Eventually, he found himself in a seven-for-one playoff for the bronze medal. He was characteristically self-aware about his chances.

“Yeah, I mean I’ve never been in a playoff with that many people, seven people for one spot, which is pretty crazy,” he said. “And if you look at the field in the playoff we had Rory McIlroy, Collin [Morikawa], we had, I dunno, three top-10 guys in the world. And we got me, 200 ranked, shooting plus-four on day one, didn’t know what to do on Thursday. But anyway, I mean I just told myself, just keep my head down, hit one shot at a time.”

In one sense, Pan was right; he came into the competition fresh off three missed cuts in a row and slid to No. 200 in the world. But he’d also played the final 54 holes of the Olympics better than anyone else in the field: 66-66-63. There’s no faking that kind of golf.

“I just reminded myself just to keep joking with my wife,” Pan added. “She’s great, she’s great caddie, but she definitely keeps the mood very light for me and it helps me to focus more. So I want to thank her for that.”

As for the playoff?

Pan burned the edge for birdie on the first playoff hole, No. 18. He made par at No. 10, the second playoff hole. At No. 11, Morikawa grazed the flagstick with an approach that settled inside a foot from the hole. Pan nearly matched him with a dialed approach of his own. The next hole, he scrambled for a par while Morikawa shorted an iron shot, buried in the bunker and made bogey. The bronze medal was all his.

“It came as a surprise to me, too,” Pan said. “After day one, plus-three 74, I remember I texted one of my good friends and I was like, ‘the struggle is real.’ So it’s quite a turnaround for this week winning the bronze medal … that was a very happy ending.”

Even happier, as it turns out, because of Chinese Taipei’s Olympic payment policies. The nation’s Olympic Committee has a policy that organizes finishes by athletes by tiers. A bronze medal put Pan in “First Class, Level 3,” which entitles him to five million New Taiwan Dollars (NT). Five million NT converts to just shy of $179,000. Pan’s final par was fruitful indeed.

The United States, by contrast, pays out more medalists — the Stars and Stripes are well-represented in the medal count each Games — but pays each one far less. Had Morikawa prevailed for the bronze, he would have won $15,000. For his golden efforts, Schauffele won $37,500. In other words, Pan made roughly five times Schauffele’s prize despite finishing two spots lower on the leaderboard.

The difference here would change the financial years of most people, but for PGA Tour pros, these amounts are relatively insignificant. Pan has made $1.1 million just this season; Schauffele has banked over $5 million. But it speaks to an intriguing discrepancy across Olympic committees and highlighting the fact that the IOC does not regulate payments — or provide any purses of its own.

Good news for Schauffele, though: “For me specifically, I don’t play golf for money or medals, in all honesty,” he said after his win. “I just play to be competitive and I want to beat everyone.”

He did exactly that, whether his bank account knows it or not.