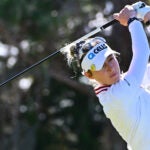 If Nelly Korda had gotten off to a slow start to the LPGA season, nobody would have blamed her.

After all, the World No. 1 has been busy. The last time we saw Korda in action was at the PNC Championship, where she teamed up with her father, played alongside Lee Trevino and John Daly and got a (well-documented) photo with Tiger Woods. She’s still in awe thinking about the event.

“I was shocked that everyone knew who I was,” she said, with modesty you can’t fake. “It was cool because they also watch women’s golf. I didn’t know that…when you’re in a field with Tiger Woods and Jim Furyk and Justin Thomas, I mean, you’re like, ‘Okay, I’m just the odd one out. You’re starstruck just hitting balls next to them on the range.'”

She estimated that she took just a week away from golf before dialing up her preparations again for this week’s LPGA opener, the Hilton Grand Vacations Tournament of Champions in Orlando, Fla. She worked hard at her home course, The Concession in Bradenton, Fla., well aware that her competition would be doing the same. But she balances practice with the other priorities in her life — which have included staying up late to watch her younger brother Sebastian playing tennis halfway around the world, winning his first two rounds at this week’s Australian Open.

“I stayed up for his past two matches, and today I was like, ‘Yeah, I’m just going to be a little selfish and prepare for my round tomorrow,'” Korda said. “I’ll keep my fingers crossed in my sleep.”

Korda has been racking up accolades, too, recently becoming the longest-tenured American at World No. 1. She knows that. She’s also not at risk of getting complacent at the top.

“Obviously it’s an amazing feeling. I try not focus too much on world rankings because rankings come and go,” she said. She also explained her primary objective for the year ahead.

“My main goal this year, which is every year, is to stay healthy. Last year I was traveling so much. I had a couple injuries here and there and the year before that as well, so I try not to focus on that.”

Korda’s year technically did get off to a slow start; she made bogeys at No. 2 and No. 4 and slid quickly down the 30-pro leaderboard at Lake Nona. But when she’s at the bottom of a leaderboard, Korda doesn’t tend to stay there for long.

“I was just kind of spraying it everywhere, left, right, you name it. I was just like, ‘Okay, so this is going to be a grind today,’ which it was,” she said.

She made one bogey against one birdie the rest of the way to post a round of four-under 68, good for T2, one shot off the lead of Gaby Lopez.

The round came from a friendly group. Korda played with former Red Sox pitcher Derek Lowe — who she requested after good vibes in previous years — and Michigan football star Charles Woodson, who she described as “super fun.”

“You can kind of pick the brains of other athletes as well and share stories, which is really cool,” she said of the celebrity format.

Lowe sits T2 as well, his name rising to the top of the “Celebrity Leaderboard” with 32 Stableford points. He was thoroughly impressed with his playing partner.

“She is No. 1 in the world for a reason. It’s just quality, the strike, the way she manages it, working her way around the course,” he said. “Having gotten to know her, it’s a very comfortable pairing. She’s easy to talk to. We both play extremely fast. So, yeah, very happy with the start, to be honest with you.”

Korda finished her post-round remarks thinking about the immediate future — sleep — but thinking big-picture, too.

“I mean, there is always so much that you can strive for. There are different little goals and then big goals,” she said.

“But I tend to be the type of person that likes to set little goals that eventually go into my big goals. There are still four of the majors that I haven’t won and so much that I would like to accomplish in my career, so it’s kind of easy in a sense to set goals.”

First in her sights: A victory in Orlando. 2022 is off to a solid start.