Pro golf’s leading writer? Meghan Maclaren is a voice worth listening to 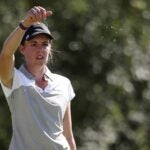 In a world filled with clichéd press conferences and Tour-spun social media, golf dialogue on the internet can run a bit dry. Fans who wonder what the pros are actually thinking are often left scouring Reddit for clues or poring through every minute of six different weekly podcasts. Look hard enough though, and you’ll find a little site subtitled “Golf … In Your Head.”

Click around and you’ll get a taste of true golf addiction, nurtured at the highest level. Scroll further and there’s insight about being a pro who’s unsure of oneself, and then an explanation of what being in “The Zone” is really like. You’ll find thoughtful commentary on Rory and Patrick Reed, too. All of that and much, much more is compiled by Meghan Maclaren, the 292nd-ranked player in the world.

Maclaren, 26, is the namesake behind the URL, MegMaclaren.com, a frequently updated blog about all things golf. And seriously, all things, like smashing a glass lampshade while grooving your swing inside an AirBnb on the road. For those who haven’t stumbled upon her writing yet, it’s time to start reading. Maclaren’s word count is higher than anyone else in the pro ranks, even higher than some golf writers themselves. Is her grammar perfect? Does she have an editor? No. But the raw, unfiltered, stream-of-consciousness she provides — and at length — is a helluva lot more insightful than the repetitious press conferences we’ll receive this week at Riviera.

We’ll start you off, new, sober reader, with a blog from 2020 titled, “The Things We Don’t Talk About,” a wide-ranging criticism of the golf world’s inability to address its wrongs and and focus on its shortcomings. Things like what an argument with a significant other can do to a player’s psyche before an important round. Or that Bernhard Langer could still be putting illegally. Or what it really feels like shooting 80 from the final pairing. Golf figureheads, in Maclaren’s eyes, often refuse to discuss the game’s demons. The “glossy efficiency of elite level performance,” always holds our attention. Why is that, she wonders on the page …

The irony should feel obvious as a golfer lists off the things other golfers are hesitant to discuss, especially as she’s not ready to talk about some of them herself. The important part is that Maclaren is writing at all. Golf is largely devoid of leaders who share their thoughts in a lengthy, reasoned manner. (The same can be said of athletes in many sports.) Maclaren has been doing it for years.

The two-time Ladies European Tour winner studied English at Florida International and is an avid reader, too. The writing comes naturally, but she finds it more necessary. “The thread that has always stayed within everything I’ve written is about being vulnerable,” Maclaren said on a cross-Atlantic phone call Sunday evening. “I feel like in the world we live in now, that’s actually a strength. I’ve always thought the more you can show that to people, the better people will be for it. That’s definitely what led me to write in the first place.”

Maclaren began her blog in 2015 with a post titled “The problem with being 20.” Six years later, it’s a genuine portrait of the angst that can set in as the real world calls for maturity but reluctantly dishes out responsibility. Fifty-eight posts after that is her most recent blog on the distance debate, titled “No Rollback on Talent,” in which she asks “What do we want from golf? What do we want golf to be?” That’s Maclaren’s blog in a nutshell; asking the reader to think about topics while she works her way through them herself.

This public journal of sorts is engaging both in the moment and in hindsight. Scroll back for past musings on Hank Haney’s sexism around the 2019 U.S. Women’s Open, or what it must be like to be Rory McIlroy, 30 years old, taking on Portush during The Open. These ideas — she’ll be the first to remind you — are impossible to tackle in 280 characters. Scroll further and you’ll find more personal topics like the pressure felt defending a title or how the game is simply about proving things to oneself.

Maclaren says the words flow more frequently during moments of vulnerability, so why not share them? Eddie Pepperell once shared and shared and shared in a blog of his own, but he’s since slowed down as a writer. Maclaren has picked up the pace. When she missed the cut at the 2020 Vic Open in Australia, she couldn’t rest until she published a blog on why the event is the best representation of gender equality in the game.

“It didn’t matter that I was awake in the middle of the night,” she says. “I was like, ‘I have to write this before the third round starts.’ It was that relevant.” Her 1,025 words wander and weave but hit home on truths facing the golf world at large. Why can’t men and women compete on the same course for the same amount of money more frequently? These revelations are not unique to her, but how many other pros put them into sentences and paragraphs and confidently beneath a byline?

While her writing ability and style have improved over time, Maclaren’s blogging is still just a hobby (though you can donate to her cause if you so please). Securing membership on the LPGA Tour remains the tantalizing fruit at the end of the branch. As of Sunday, the road to get there included banging balls into a net in her soggy backyard garden. That’s life under lockdown restrictions. A string of Symetra Tour events is on tap and after that, a return to the LET. She’s been working with a new trainer and “eating as much as I can,” in hopes of getting stronger and swinging longer. She’s called the experience a “mini Bryson.” We can only hope she’ll write it.

Women’s Gear in the Pro Shop