It’s major season! Here are the host courses for all 5 LPGA majors in 2022 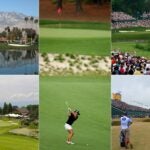 Five great courses are set to host LPGA majors in 2022.

Major season is here! The Masters is still days away, but the top women golfers in the world already have a few 2022 major rounds in the books.

With the game’s best competing for glory in the final round of the newly-named Chevron Championship today, it’s a good time to take a look at all of the major championship host courses for the 2022 LPGA season.

There are a few familiar tracks on the list this year, including one golf fans will see for the final time. So let’s take a quick look at each course to get ourselves familiar with them before they hit the world stage.

The first LPGA major of the year may have a new name, but it’s gone through several name changes in its lengthy history dating back to 1972 (it became a major in 1983). But all previous editions of the tournament affectionately known as the Dinah Shore, including this year’s event, have one thing in common: they’ve all been played at the Dinah Shore course at Mission Hills Country Club.

But this will be the last year that the Chevron will be held there, and the last time a winner will get to take the leap into Poppie’s Pond. That also means it’s the last time golf fans will get to see major championship action on the course’s storied fairways and greens.

This year, the biggest tournament in women’s golf is heading to Pine Needles in North Carolina. The classic track has a legendary designer: Golden Age architect Donald Ross. And the course brings to mind one of the most famous Ross designs of them all, also located in North Carolina: Pinehurst No. 2.

This will be the fourth U.S. Women’s Open held at Pine Needles after previous events in 1996, 2001 and 2007. Some legendary players have hoisted the trophy there, including Annika Sörenstam, Karrie Webb and Cristie Kerr.

Now for the first time, the women will get to fight for glory at the Blue Course. It may be the first, but it won’t be the last: Congressional is also slated to host the 2027 KPMG Women’s PGA Championship, and the men’s PGA heads back there in 2031.

Evian Resort has hosted the Evian Championship since its inception in 1994 as a LET event known as the Evian Masters. In 2000, the tournament was co-sanctioned by the LPGA Tour, and in 2013 it became a major.

With the Chevron leaving Mission Hills for good next year, the Evian Resort course is now the only major course players will compete on every year.

There are no weak points in major venues on the LPGA schedule, but it’s easy to argue they saved the best for last. August’s Women’s Open will be hosted at historic Muirfield in Scotland.

The classic links course has played host to 16 men’s Opens dating back to 1892, when amateur Harold Hilton took home the trophy. Most recently, Phil Mickelson claimed his first and only Claret Jug at Muirfield in 2013. Now, for the very first time, the best women golfers in the game will get to put Muirfield for the test with major history on the line.