Mayakoba mindset: Inside the chillest stop on the PGA Tour 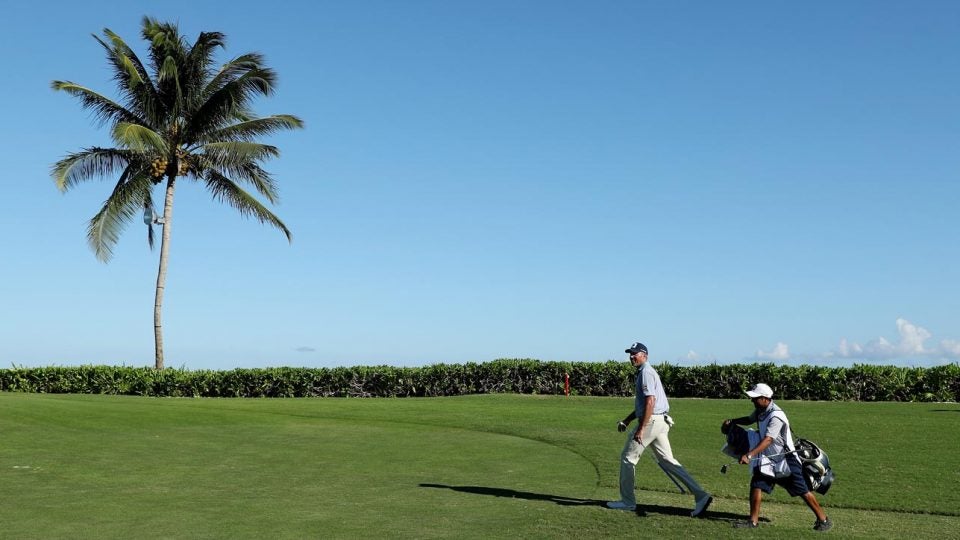 SOLIDARIDAD, Mexico — Piloting a single-speed beach cruiser bicycle, basket dangling off the handlebars, Abe Ancer, the world’s best Mexican golfer, winds his way through the Mayakoba Golf Classic’s Wednesday pro-am. He speeds up the cart path along the 18th fairway, wary of any amateur misfires that might come in his direction, and slows as he approaches the clubhouse, where he ditches the roadster against a bush.

Not far from Ancer’s bike, Wesley Bryan is putting with what looks to be an Orange Whip training aid and giggling at the consistency of his makes. “Let’s have a three-hole putting contest with this thing,” he tells Russell Henley. “Five bucks.” Henley isn’t convinced. “Okay, two holes,” Bryan presses, casually curling in an eight-footer as he says so.

Kevin Chappell walks by and nods hello, trailed by his caddie, whose sleeves are hiked up all the way, understandably working on evening out his shirt tan.

Across the green, Zach Johnson glances up from a short putt; he spots a friend sauntering off the range. “Kooch! Didn’t know we were getting you here.”

“Hey, I still have something I want to talk to you about, pick your brain on,” Johnson said.

“Well, heck,” Kuchar called back. “This is the week for it.”

This is the week, indeed. Laid-back scenes play in the lead-up to every PGA Tour event, of course. But there’s nothing quite like the Mayakoba Golf Classic, tucked into an unassuming corner of the PGA Tour schedule and an idyllic corner of the Riviera Maya. Chiller than Pat Perez’s hair. It may just be the chillest event on Tour. Here’s why.

Most players coming in for the week land at the airport in nearby Cancun, hop a 40-minute shuttle to the Mayakoba resort and don’t leave the premises until the tournament’s conclusion. Four individual hotels are inside the property, each with easy access to the golf course (or beach!) by foot, golf cart shuttle or, yes, bicycle.

Most players stay within these walls, though a few bargain-hunters have taken up residence down the beach about a mile at one of several all-inclusive resorts, where mimosas and pancakes get carted into the brunch buffet by the hundreds. There, too, players are just a 10-minute shuttle from the clubhouse. The entire setup lends itself to a certain pace of life.

The last time @K_m_Mitchell and @SamRyderSU played in the same group …

Ancer is among those staying on site, at a villa not far from No. 13. That’s where he got the bike. “We’re at the pool and we go to the beach, it’s right there. Cruising around. Probably won’t do anything crazy, just kind of hang out and relax,” he said. “This is an extremely relaxing week, which…I’ll take advantage of that.”

Others will, too. The PGA Tour always exists in a giant bubble, but this week is bubblier than ever. No sports games to go to, trendy neighborhoods to explore, friends to visit, or restaurants to try. Just an (all-inclusive) exclusive experience behind Mayakoba’s gates.

Rookie Sam Burns, making dinner plans early in the week, asked a reporter if he’d be out of a sit-down interview by 6 p.m. He laughed as he finished the question.

“It really doesn’t matter, actually. I’ve got literally nowhere to be.”

THE COURSE, OF COURSE

For the mere mortal, Mayakoba’s El Camaleon golf course would be brutish at best. Lies in the rough can be nasty. The wind can blow. And the jungle, which lines nearly every hole, is don’t-even-bother thick. For the pros, it’s a different story altogether.

The greens sputter along, stimping somewhere between and 8.5 and a 10, depending who you ask. That’s how they like them. “If it’s windy, they’re too slopey to speed ‘em up,” one caddie confided. That didn’t appear to be an issue this week. In Thursday’s opening round, nearly a third of the field — 41 players — shot four-under 67 or better. Warm, still conditions, relatively wide fairways, gettable par-5s and those slow greens combine for serious scoring.

“It’s hard to really have a putt that gets too far away from you, so it’s pretty easy to make putts out here,” Richy Werenski said. He opened 65-66.

Anirban Lahiri opened 65-66 too, and still found himself trailing the leaders. “I mean, guys are shooting, -8s, -9s and -10s like it’s breakfast,” he said. “Obviously there’s a lot of birdies to be had out there.”

Mayakoba falls near the tail end of the Tour’s “silly season,” which most high-profile players take as their time away from the weekly grind. Most of the media follow suit. It’s an undeniably important event for most of those in attendance — younger players fresh on the Tour, and others with low status fighting for valuable points — but they, too, clarify that golf is just a piece of their week.

Rickie Fowler came down last year with his fiancé Allison Stokke and was hooked. “Small vacation in a way, just happen to be working at the same time,” he said. Jordan Spieth, shopping around for fall events to reportedly satisfy a debt he owed the Tour, was easily convinced to show up, too.

“Now that I’m here, I’m wondering why I haven’t played it every year,” he said. But that was Wednesday, and Spieth went on to miss the cut. We’ll see if he returns.

It’s a good bet Matt Kuchar will be back. Working with a local caddie on the bag, a local legend named David with the nickname “El Tucan,” Kuchar blitzed the field through three rounds and found himself at 20 under, four clear of the his nearest competitor.

He sounded just as excited about time at the beach and the pool with his wife (turned caddie) and two sons. “You get to play some golf and do some work as well, but it feels a bit like a working vacation,” he said.

A working vacation with $1.3 million awaiting the winner, of course.

Want access to players? Come to Playa del Carmen. From Tuesday to Friday, it was rare to see more than a handful of fans alongside a group, while the hospitality tents cried out for attention. The positive here was that those in attendance got an intimate look at the action.

When asked about the crowds on Thursday, Fowler put a positive spin on their sparseness. “A lot more people come out on Saturday and Sunday, so it will get a little bit more crowded,” he said. (“It was great to see some people out taking advantage of not as many people being out,” he added, channeling his inner Yogi Berra, nonsensical yet perfectly clear).

There are other valid nominees in the Great Tour Chill-off, of course, but none can quite measure up. Next week’s RSM Classic? Too cold. Hero World Challenge? Too much Tiger. Last month’s Safeway Open in Napa is a strong contender, but the Caribbean out-chills wine country by a nose. I posed the question to Wesley Bryan, who suggested Kapalua, where Tour pros enter some unspoken agreement to hardly prepare for the event at all. But with only thirty-odd players, that’s disqualified too.

No, if you’re a player looking for some R&R (and a chance for some $$$, too) there’s one place that’s the best for you. Just ask Patton Kizzire. “I don’t know, I like it here,” he said. “The beach, the hotels, the golf course — it all just kind of fits.”