DUBLIN, Ohio — Matt Kuchar found himself at the center of a strange ruling Thursday afternoon at the Memorial, a ruling that required multiple rules officials and a TV replay to sort out. So what happened — and what did Kuchar want?

Kuchar’s tee shot on No. 17 wound up in the edge of a pitch mark that he (and later, a rules official) determined was not his own. But Kuchar called in PGA Tour rules official Robby Ware in an attempt to gain relief on the belief that his bouncing ball had actually created a second pitch mark overlapping with the original. Players are entitled to relief from their own pitch mark, but not from that of another player.

Ware brought in an NBC cameraman and even ran back the ball landing on instant replay, but was ultimately unmoved by Kuchar’s case. Kuchar called in a second opinion from another rules official, Stephen Cox. 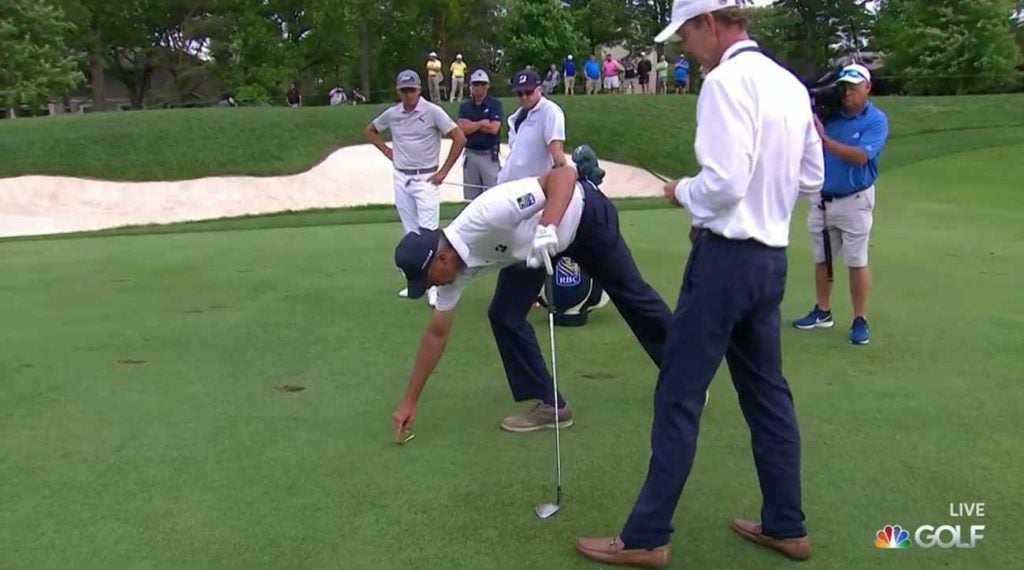 Matt Kuchar and Robby Ware, with Rickie Fowler looking on.

As Cox approached, he asked Kuchar to explain the ruling he was looking for. “I’m just saying, there’s potential that it broke new ground in making its secondary pitch,” Kuchar told the official.

Cox was skeptical. “Matt—the ball came to rest right there, and we know that it’s not your pitch mark.”

Kuchar persisted. “I’m saying, if you look at the film, it looks like it’s gone hard enough to break new ground.”

But Cox held his ground. “Ultimately it’s already in a hole that’s made by someone else, and I’m not buying that on a secondary bounce we’re going to get you out of a pitch mark that’s been made by somebody else,” he said.

Kuchar made a final appeal that he watch the film, but Cox was firm.

“I don’t need to look at it Matt—honestly, trust me, the guys have already seen it on TV…let’s get it back in play. It’s in a pitch mark which has been made by another stroke. That’s the decision.”

It wasn’t clear if Kuchar was joking when he paused for a minute and replied: “Could I ask for a third?”

Kuchar would go on to play a 7-iron from the difficult lie, which he played to the back of the green. He would complete a difficult two-putt for par.

After his round, Kuchar downplayed the incident, calling it a “confusing rule”  and a tough break.

“I know there are chances where you hit a ball, you end up in a divot, that’s bad luck. You end up in a pitch mark, that’s really bad luck. That’s part of the game, you get bad breaks. I was very pleased to make 4 regardless.”

Mid-interview, Rickie Fowler, who had overseen the entire sequence of events, walked through the back of the interview room. “Cheat! He was trying to cheat!” Fowler yelled to reporters with a wide grin, making light of the situation.

“Rickie was all over me like a hawk out there,” Kuchar said. “I thought there was potential that it might have broken new ground. I guess it’s not a new embedded ball if it breaks new ground.”

Kuchar said this was the first time he’s ever called for a second opinion on a ruling.

“The only reason I did it is just from seeing the video and not being totally clear on the rules, and they’re tricky enough. We’re lucky to have a great staff out here and I certainly trust their opinion. I only asked for a second one because I thought there was potential and thought, you never know, you may get someone else who says there is potential, we could look further into that.”

Kuchar is T66 at the Memorial after finishing off an opening-round 73.