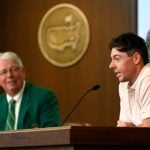 AUGUSTA, Ga. — You know how the Super Bowl media day has become an event unto itself? Golf’s version is Masters Tuesday, when one-by-one the game’s best players and biggest personalities are beckoned into the press room to be grilled by reporters. It is a chance for the golfers to pontificate and obfuscate, to say nothing of move merchandise.

Carried live on digital platforms and often on Golf Channel, the Tuesday pressers are where Tiger Woods, in 2019, introduced his Frank logo to the wider world, and it’s no accident that the players bust out their best five-figure timepieces and drape meaty forearms across the dais, the better to please their endorsement partners.

The “scripting” of player clothing has become a big deal during major championships, but Dustin Johnson said that doesn’t begin in earnest until Thursday. Did he spend extra time picking out Tuesday’s outfit — navy pants paired with a charcoal grey Adidas shirt with a blue collar — knowing the world would be watching? “No, I didn’t even think about it,” he said.

As with everything at the Masters, the environment is carefully controlled and every press conference begins bang on-time. Per prevailing club rules, the players do not wear their hats indoors. “I keep my hat on as often as I can,” said Justin Thomas, a nod to the logo that helps butter his bread, “but I respect the rules if places want me to take it off. I have no problem with it.”

This, of course, means the Tuesday pressers reveal all manner of hat-head. “I’m sure my hair doesn’t look exactly great right now,” Thomas said, correctly, “but luckily I wear a hat for my job, so I’ve just got to get through this press conference and I’ll be okay.” It could’ve been worse, as Rory McIlroy’s mop-top illustrated. He appeared to have a low-key comb-over, with a swoosh (not the branded kind) of hair traveling east across his left temple.

It’s actually surprising Augusta National doesn’t provide a hair-and-makeup team because the interview room is really a TV studio. Behind where the players sit is a green screen that cues up a different image of the course for each press conference.

Does Dustin have any preference in his backdrop? “I do not,” says this most low-maintenance of superstars. “Whatever they like is fine by me.” The moderators change, too, with the green jackets appearing to call dibs on their favorite players. McIlroy’s minder had a lovely Irish lilt and there was clear chemistry between them, while one member of the media committee, Rob Johnston, never misses a chance to be by Tiger’s side; while offering introductory remarks, Johnston was positively glowing.

As David Letterman famously did with his studio, the room is kept quite cool, to help those being interrogated from getting the dreaded flop-sweat on their brow. With social distancing protocols in effect this year, the largely empty room felt particularly chilly. “Are they hanging sides of beef in here?” one press room wag wondered aloud.

That’s not the only reason the space can feel foreboding. The interview room in the old press room was a little bandbox that was crowded and intimate and promoted a sense of closeness and connection between the players and reporters. To provide clean lines for the video feeds, the competitors are now seated on a raised stage, far from the scribes and separated by a moat of plants. It feels less like a conversation and more like they are professors offering a lecture.

A painting of Clifford Roberts hangs next to the stage and, evoking the Mona Lisa, no matter where you sit it appears the stern chairman emeritus is staring into your soul, waiting to pass judgement on the question being offered. No wonder one reporter choked and addressed Brooks Koepka as “Bryson.” The ensuing icy glare dropped the temperature in the room that much more.

And yet, there were still lovely, revealing moments on this Masters Tuesday. Phil Mickelson appeared genuinely happy to have been invited in given that he now rarely does pre-tournament press conferences. A spot in the big room on Masters Tuesday is an acknowledgement that he still matters. (Less heralded players are consigned to the flash area near the clubhouse.) When I asked Mickelson about this he said, “I just don’t think my views are that much desired during this era, and it’s been easy to kind of just slide in and out.”

Woods got teary-eyed reliving last year’s emotional triumph but broke out the needle when asked to look ahead to being an honorary starter someday alongside Phil the Thrill. “Hopefully that will be us one day,” Tiger said, “and I’ll be hitting bombs past him.”

McIlroy spoke sweetly about his baby girl and offered a moving monologue on how the mettle of a champion is forged: “I think my grit’s came from my failures, and I don’t have to look any further than this place in 2011 [when he lost a four-shot lead on Sunday]. I try to say this to young guys that are coming through: You can’t be afraid of failure. You have to embrace the fact that you are going to fail at things, but you should learn from them and then when you go again, you should be better. I’ve had a nice little bit of success in this game, but I have failed a hell of a lot more than I have succeeded. And that is why I have succeeded, is because I went through those tough patches. So, I feel like that’s where I’ve got my persistence or grit from.”

It takes a similar perseverance to make it through Masters Tuesday, with 10 pressers spread across eight and a half hours. At the end of this marathon I found inspiration (and the right focus for an afternoon snack) in the wise words of DJ, who, when asked to name his favorite part of Masters week, said, “The sandwiches. All of them.”