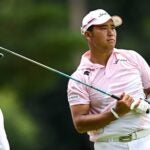 Hideki Matsuyama and Xander Schauffele already have a bit of history this year.

KAWAGOE, Japan — Sunday at the men’s Olympic golf competition is going to be a shootout. You can plan on it, folks. Kasumigaseki Country Club is ripe for the taking, and a leaderboard of big names and ball-strikers have three different prizes to play for. For those based in the United States, it will almost surely be worth staying up for. Or waking up for. Whatever suits you best.

Xander Schauffele leads by one for the second day in a row after carding another 68 to sit at 14 under. Through three rounds, that number has been his worst tally around Kasumigaseki. Hideki Matsuyama, Japan’s native son, is one back, with well over a hundred local volunteers, media and photographers following his every move. Sound like the 2021 Masters? Schauffele and Matsuyama played in the final pairing together at Augusta National just over three months ago, when Xander left his approach on 16 short and in the water, letting Matsuyama waltz to a green jacket.

“I plan on wearing that jacket some day as well,” Schauffele said after his round Saturday. “Whenever you play against the world’s best you happen to see them a lot. So we’re playing together tomorrow in the final group and I assume we’ll be playing in more final groups for years to come.”

Unlike the Masters, where only a couple players were really in contention — Matsuyama began that day with a four-shot lead — the Olympics leaderboard is jam-packed. Great Britain’s Paul Casey and Mexico’s Carlos Ortiz are both two shots back at 12 under. A group of four others are three back, including Rory McIlroy.

Tommy Fleetwood and Shane Lowry both started slow during their time in Japan, but they’re now just four back of Schauffele, two back of a playoff for bronze. Sixteen players are within four shots of a medal right now, not including the group of 11 just behind that who sit at seven under. One of them is Thomas Pieters, who must be kicking himself for that second-round 76. Otherwise, he’d be squarely in contention.

“Any medal, I mean right now I would be very happy with bronze,” Pieters said. He finished in fourth in 2016. “I probably need something like eight under tomorrow, nine under, so I need to play the round of my life tomorrow.”

Surely he’s not alone in that thinking.

Justin Thomas is still bummed. It’s been a frustrating week for the No. 4 player in the world, and the second-highest ranked player in the Olympics field. Thomas made 18 pars during his first round and has played just four under in the 36 holes since, a number that’s just not good enough on this imminently scoreable golf course.

Thomas’ 68 on Saturday was his best total of the week, but if you ask him it’s clearly too little, too late. “I shouldn’t say I don’t have a shot,” Thomas said after the round. “I’ll have to shoot something in the 50s, but, no, the damage has already been done.” He’s not wrong.

Sungae Im’s 63 was the most important round of the day. The South Korean golfer, as has widely been covered, is playing for more than just a medal this week. If he were to finish in the top three here at the Olympics, Im would be allowed to forego the mandatory military service that all Korean males are expected to complete. And entering the day, that popular storyline had generally faded since he and Si Woo Kim were both at least six shots out of third place.

But Im torched Kasumigaseki Country Club Saturday, making 10 birdies against two bogeys for the round of the day, a 63. He gained over three shots on the field with his putting alone, making up for a below average afternoon with his irons. He now sits at seven under for the event and five shots out of the current bronze medal playoff position.

Playoffs are coming … right? They have to be. This leaderboard is so bunched, it feels like we’ll have our first playoff for a medal, as there was none at the 2016 Games in Rio. How crazy is it that both men’s and women’s fields at the 2016 Olympics finished with a solo first, a solo second and a solo third place finisher?

With 27 players currently within five shots of third place, on a course where it has been difficult to create separation, we will almost surely see a playoff for a medal on Sunday. If it happens it’ll be sudden death, with the highest ranking medal up for grabs being decided first. The dream scenario? A four-way tie for first place. How could you go to sleep on that?