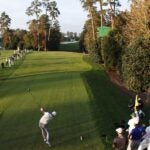 Dustin Johnson hits a shot on the 13th hole at Augusta National Golf Club on Saturday.

World No. 1 Dustin Johnson, world No. 2 Jon Rahm and world No. 3 Justin Thomas were among the five players to lead the Masters after the second round.

Three players are tied for second

Four behind Johnson and tied for second are Sungjae Im, who shot a four-under 68; and Abraham Ancer and Cameron Smith, who each shot three-under 69s.

Five back is Dylan Frittelli, six back is Thomas, and seven back are Rahm, former champion Patrick Reed and Sebastian Munoz.

Tiger Woods is 11 shots back

Tiger Woods, the defending champion and five-time Masters winner overall, shot his first non-subpar round of the week with an even-par 72. He’s at five under overall and 11 shots behind Johnson.

Bryson DeChambeau, this year’s U.S. Open champion, shot a three-under 70 and is 13 shots behind Johnson.