Here’s what it’s like to be an amateur paired with Arnie, Tiger and Phil at the Masters 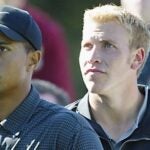 Tiger Woods and Ricky Barnes stand on the 8th tee during the second round of the 2003 Masters.

Veteran Ricky Barnes has yet to win on the PGA Tour, but he does have one incredibly prestigious victory on his resume: a U.S. Amateur.

Barnes won the U.S. Am back in 2002, and was invited to play the Masters the following year. Traditionally, the reigning U.S. Amateur champion is paired with the reigning Masters champion for the first two rounds, and for Barnes, that champion just happened to be Tiger Woods. But Tiger wasn’t the only superstar Barnes had the opportunity to tee it up with at Augusta National.

Barnes appeared on this week’s episode of Subpar and regaled hosts Colt Knost and Drew Stoltz with the story of his experience playing alongside an impressive trio of the game’s best players in the span of just one week.

Barnes came into Masters week riding a wave of confidence, having won the World Amateur in Malaysia and posting a good finish at the Tucson Open while still a senior at the University of Arizona.

“I go into April, and I’m paired with Tiger Woods [at the Masters],” Barnes begins. “And I go out that first round, I walk across the street, get on the putting green, obviously haven’t met Tiger yet, but I feel like, I played nine holes with Arnold Palmer before they played their big Par-3 contest, and I seriously think I was just as nervous teeing off with [Palmer], and out on the first tee, and they were lined up tenfold down the fairway on the first tee, and I get to play with Arnold. So I was just as nervous that day as I think the next day playing with Tiger.

“But Tiger came over to the putting green,” Barnes continues. “‘Hey, Rick, how’s it going? Look forward to today.’ [That] maybe settled me down a little bit. You know, It’s a blur. I shoot 69 the first round. And that kind of settled me down.”

“You beat him by seven,” Stoltz says.

“The course did set up good for me,” Barnes concedes. “I was kind of a long hitter back in college. The draw fit my eye. I felt comfortable out there, for the most part.”

Barnes shot 69-74 — good enough for T3 and one shot out of second place — to get into the penultimate third-round pairing on Saturday alongside Phil Mickelson. Though Barnes ended up finishing 21st, he’s still amazed by the company he kept on the course that week.

Barnes admits he’s had a good track record when playing with Tiger for one particular reason.

“The ambiance, the way they line the fairways with him, or set the stage with him, it’s almost like, I understand why he plays well all the time,” Barnes says. “You have to get super-focused with 35,000 people watching you on a Thursday at a normal tournament.”

You can listen to the entire Subpar interview with Barnes below.