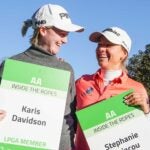 Karis Davidson and Stephanie Kyriacou pose with their life-size LPGA Tour badges after advancing through Q-Series.

The biggest gauntlet in pro golf just wrapped up Sunday in Alabama, and if you weren’t paying attention, you might have missed it.

We’re talking about the LPGA Q-Series. It’s an eight-round torture chamber where some of the best female golfers on the planet try and earn their LPGA Tour card, all the while competing for a total purse of $150,000. Four rounds in Mobile, Ala. and four more in Dothan, Ala. The fairways are light green and the rough yellow and crispy. All of it dormant and ready for the new year, fitting for the competition at hand.

What the Q-Series lacks in funding — can we stick some Grow The Game Dollars here, please? — it thankfully makes up in the fact that 45 players advance. Forty-six women punched their ticket Sunday afternoon (Top 45 and ties) to status on the LPGA Tour. That’s a huge deal for them. Every one of them, too, from medalist Na Rin An down to Mariah Stackhouse, who played those eight rounds in 29 more strokes, but just well enough to advance.

Karis Davidson was on cruise control through four rounds, but suddenly started leaking during the second week. Her 77 on Sunday was just enough for her to advance. Seventy-eight would not have been enough.

Four of the graduates were amateurs, too. Playing for no money a week ago, likely fully professional when they tee it next! Talk about life changing quickly.

Maddie Szeryk woke up Sunday morning on the outside looking in, but a final round of four-under 68 pushed her two shots inside the cut line. Shortly after, the Canadian could be found posing with her life-size LPGA Tour credential, grinning ear-to-ear. Trust that it was not that stress-free during the round. She birdied the last two holes — that’s Nos. 143 and 144 of the tournament — to reach that mark. Last week, she’s a grinder. This week she’s an LPGA Tour rookie.

Of course, it wasn’t all positive vibes at the Robert Trent Jones Highland Oaks course. You can’t have LPGA Tour success stories without some of the competitors falling short. Of those on the outside looking in, you have to feel for Katelyn Dambaugh, who was 11 under through five rounds — just 54 holes away from tour status. But a couple double bogeys led to a sixth-round 78. Then her final round came and went without a single circle on the scorecard. Seventy-six, missing by a single shot.

Lindy Duncan and Kristen Gillman were also both staring down qualification through seven rounds. But that’s why there are eight rounds, apparently. They don’t hand out 70-hole victories in pro golf, and they don’t hand out LPGA Tour status through seven rounds. Only after eight. Duncan and Gillman both missed by three shots after shooting 76 Sunday.

The most daunting aspect of this is that the eight-part finishing tournament is just that — the finishing tournament of the series. There’s also Stage I, which was finished in August. Then there’s Stage II, which wrapped up in October. And finally, the eight-round bonanza that is finally complete. Thankfully, every player teeing it Sunday had advanced through the first half of the event — that is, the first four rounds. The herd was trimmed to just 73 at that midway cut, so 27 who made the cut but did not earn Tour status will at least hold status on the Symetra Tour. It’s a nice safety net to fall into, but the road is much less glamorous there. And it almost surely leads right back to Alabama 11.5 months from now.