5 notable players who earned their LPGA Tour cards for 2022 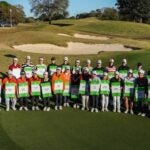 LPGA Q Series just wrapped up in Alabama with 46 players earning status for next season.

The LPGA Q Series — much like Q school on the men’s side — is a grueling stretch of golf for some of the top players in the world. Over eight rounds, players compete for their livelihoods: a tour card for the following season.

The top 45 and ties at the conclusion of 144 holes earn LPGA status for the following season, while those who fall short are relegated to the Symetra Tour. The pressure is among the most intense in golf.

The 2021 edition of LPGA Q Series just concluded at RTJ Golf Trail at Highland Oaks, with Korean Na Rin An earning medalist honors at 33 under par. She will be joined by 45 other Q Series graduates next season on the LPGA Tour.

Here are five other notable names who survived the grueling process over the past two weeks in Alabama.

Bianca Pagdanganan is well-known on the LPGA circuit for her gaudy distance off the tee, and she rode those bombs to a 14-under performance that left her comfortably inside the top 45. With her T10 finish at Q Series, the 24-year-old heads back to the LPGA Tour looking to cement herself as one of the future stars of the game.

The 2015 LET Rookie of the Year has a stellar resume with six professional wins and two Solheim Cups under her belt, but she still found herself grinding for playing privileges in Alabama. No sweat for the 25-year-old Dane as she earned back her card with ease placing T14.

Hinako Shibuno won her major title too early to benefit from the “Sophia Popov Rule,” and so three years after her Women’s British Open victory, she had to fight to keep her playing LPGA privileges. The conquest came with little drama as Smiling Cinderella was six shots inside the number to retain her card.

While Gina Kim squeaked into the top 45 by just a shot, we might not see her on the LPGA Tour until next summer. The No. 9-ranked amateur in the world still has eligibility left at Duke and could elect to return to her Blue Devil teammates in the spring to finish out the season. If she does, she’ll have to take advantage of her playing opportunities when she does turn pro after the NCAA Championships.

Mariah Stackhouse had a tough season in 2021, making just three cuts in 16 starts, but she kept her status heading into the new year thanks to a two-under 70 during the final round to finish T41. The former Stanford Cardinal is heading into her sixth full season on tour.