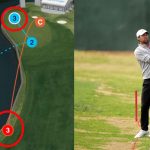 Scottie Scheffler's bizarre employment of this little-known rule stumped everyone at the WGC-Dell Match Play.

Golf is a game of order. Even, it appears, when that order makes little sense.

On Sunday at the WGC-Dell Match Play, Scottie Scheffler befuddled everyone, from fans watching at home to the NBC broadcast team, when he appeared to play out of order after water balls on consecutive holes.

The situation started on the 12th hole of Sunday’s semifinal match between Scheffler and Matt Kuchar. On the hole, Scheffler yanked his approach shot from the left fairway into the water adjacent to the green. Under the rules of golf, the 24-year-old was afforded relief at the last point of entry — some 77 yards away from the pin.

Meanwhile, Kuchar hit his approach shot out of the trees and to the front edge of the No. 12’s large, sloping green. With the pin in the back, Kuchar had a little less than 100 feet to make birdie — no cakewalk, but very obviously closer to the flagstick than his counterpart.

But then, a few seconds later, Kuchar, not Scheffler, hit his third shot on the hole. Of course, basic matchplay roles dictate that the player further from the hole is responsible for playing his shot. It seemed, for a brief moment, that the two golfers had played out of turn.

Then, on the 13th, Scheffler did it again, knocking yet another shot into the water adjacent to the hole, and once again letting Kuchar take his following shot from much closer proximity.

So, what on earth was going on? By all accounts, the rules of golf.

Rule 6.4a dictates “the ball that is farther from the hole should be played first,” but it doesn’t dictate which ball. Because Scheffler has the freedom to play his ball as it lies, he technically could play his ball from the lake floor, which (though in the hazard) was closer to the flagstick than Kuchar’s shot on both approaches. Until Scheffler has dropped his ball, it’s Kuchar’s responsibility to act as if he is going to play the ball in the lake bed, and therefore, Kuchar is the further of the two players from the hole.

Ultimately, the bizarre sequence would mean very little, as Kuchar (who had least to gain from going first in both instances) won both holes. Scheffler would win the match 1 up, moving on to the finals with a boatload of confidence and evidently, a stringent understanding of the rules of golf.