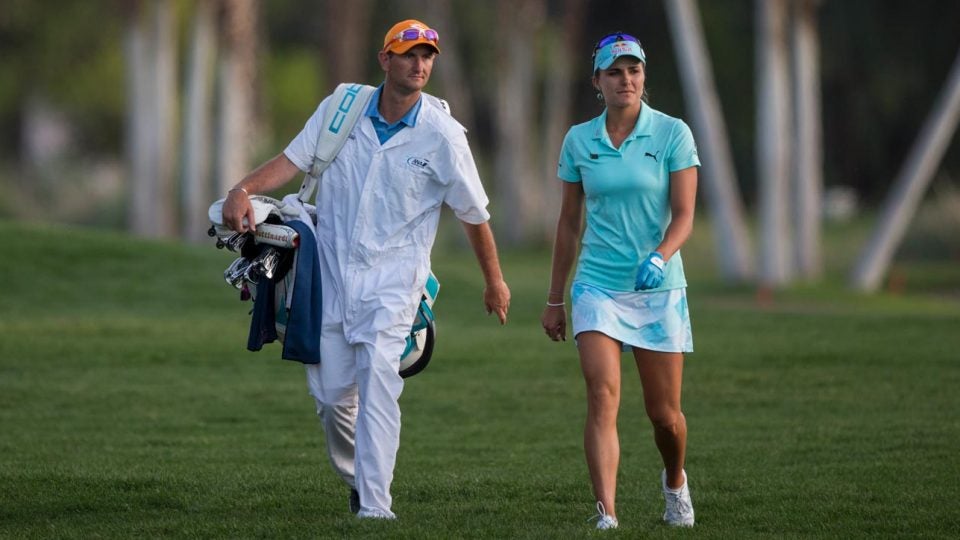 Lexi Thompson has reportedly split with her caddie in the leadup to the LPGA's season finale.

Lexi Thompson has split with caddie Kevin McAlpine in the lead-up to the LPGA finale, according to a report from Golfweek.

McAlpine confirmed to Golfweek that he will not be caddying at this week’s CME Group Tour Championship in Naples, Fla., for either Thompson or anyone else. Thompson, 23, declined to comment through her agent, Bobby Kreusler.

It has been an up-and-down couple years for Thompson on the course. She has alternated top finishes with mini-controversies, most famously a four-stroke penalty handed down at last year’s ANA Inspiration in the midst of the final round. She remains the only American ranked in the world top 10, despite going more than a year without a victory.

In August, Thompson skipped the British Open “to take some time to work on myself.” Last month, she took to Instagram to discuss her battles with body image.

McAlpine had a brief professional playing career of his own, but traded that in for a job selling junior golf clubs until coincidence had him link up with Thompson. The ANA rules debacle came in just the pair’s fourth start together, but both drew praise for their handling of the event.

“I had never experienced anything like that before so I just had to do what I could to help her refocus. In the end, it was tough to lose in the playoff but I was just glad that I was able to help at that moment in time,” McAlpine told bunkered.

McAlpine is in a relationship with another LPGA star, Anna Nordqvist, which created a particularly interesting battle when Thompson and Nordqvist faced off in an all-time match at last year’s Solheim Cup. When the match ended in a tie, McAlpine admitted some relief. “I kept my job and kept my girlfriend!” he said.

It was not immediately clear who Thompson will have on the bag in Naples as she seeks to pick up her first victory since September 2017.