From the Black Swan to the weatherman, ranking the 11 best golf moments in ‘Curb Your Enthusiasm’ 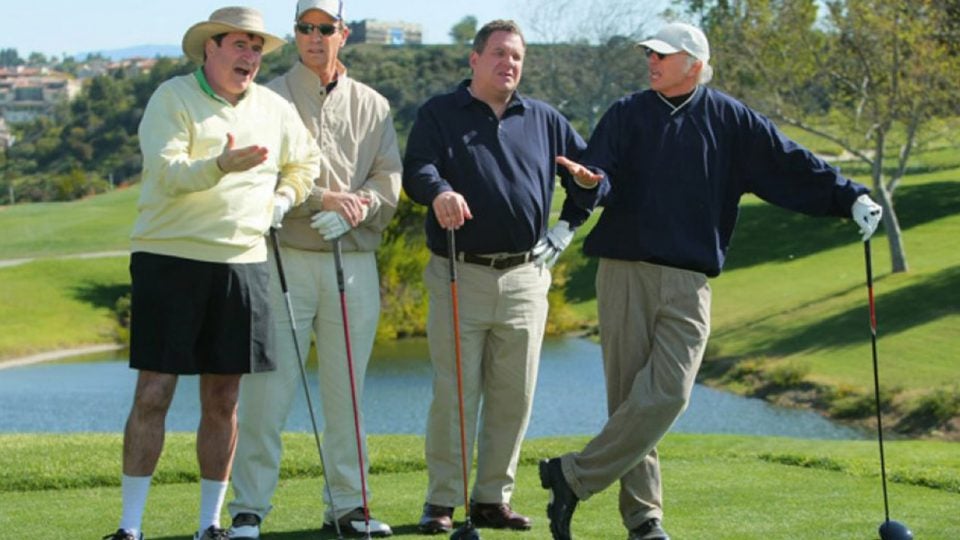 It’s no secret that Larry David loves golf. He’s an avid player who finds a way to slide his passion for the game into his work. There are golf references littered throughout Seinfeld, which he co-created with Jerry Seinfeld, and in Curb Your Enthusiasm. With Curb returning for its 10th season Sunday, now feels like a prettttty, pretttty good time to look at the 11 best golf scenes from the show’s run:

LD’s foursome is on the 17th green, and victory is all but assured after the other team in contention blew up just ahead. All they have to do is coast in with a four-stroke lead…

Right as Larry is lining up his putt, his teammate Jeff’s wife, Suzy, arrives greenside with her daughter and a drink in hand. Suzy takes a sip and lets out a joyous “ah,” a reoccurring theme throughout the episode. Larry is being blackmailed by Suzy’s daughter to speak up about the annoyance of this habit and calls in the favor on the cusp of a championship.

Larry abides and starts a chain of events that simultaneously costs his teammates the tournament and their marriages.

Growing up, Larry’s golf idol was Gary Player. His wife was able to connect him with the Black Knight for 18 holes and a visit to his home. Larry decided to rock his new green jacket for the occasion, which caught Player’s attention for its near-identical appearance to the Masters’ green jacket.

Player offers to trade his 1961 Masters jacket with Larry, so they can see how each fit. The excitement is sucked out of the room when Player keeps Larry’s jacket on to use the bathroom. It’s now been contaminated in Larry’s eyes and he’s left with the dilemma of snagging Player’s Masters green jacket and calling it even.

Larry’s game had his rock bottom and he was in dire need of help. When his new neighbor spots clubs in his trunk after a run-in at the grocery store parking lot, he informs Larry that he trains people in his backyard and extends the offer to Larry. There’s only one thing making Larry hesitate: his neighbor is a registered sex offender.

Larry weighs his options and decides to move forward with the lesson, and he’s quickly swinging better than ever. Larry putting whatever morals he had left aside for the betterment of his golf game is Larry’s character in a nutshell.

The golf course is the origin of all life’s best ideas. Case in point, Larry gives his friend Marty Funkhouser a lesson in how to save a relationship by sending an “accidental text” after Larry made him look bad on a date. Larry explains to Funkhouser that he should write out a stern text that appears to be meant for Larry but he sends it to his date instead. Funkhouser throws Larry under the bus and wins back the heart of his date.

It’s a win-win situation and yet another genius idea that originated on the course.

7) Larry gets kicked out of his country club

A member of Larry’s club passes away and his favorite club was placed in the coffin with him. The problem? It was Larry’s 5-wood, and Larry loves his 5-wood. He hits that thing like Henrik Stenson hits his 3-wood. Larry gets caught when he comes up with a plan to retrieve it (more on that in a bit) and the club kicks him and his best friend Jeff out because of it.

Now the two are left to be scolded by their wives for the situation. “You know what, that 5-wood was irreplaceable. I would rather be out of that club with my 5-wood than in it without it,” Larry explains, and I have to agree with him.

The plan was to take Jeff’s 5-wood from his trunk and make a switch. It was executed to perfection … until someone took a peek in the casket and noticed it was a different model.

You can’t fault Larry here. Once you find the perfect club there’s simply no replacement. There’s something about the mental confidence a golfer has in their favorite club that can’t be replicated. Hell, I wouldn’t have blamed Larry if he dug down six feet to retrieve his 5-wood had it been buried. You gotta do what you gotta do when it comes to your go-to club.

Now that they’re club-less, Larry and his wife begin the interview process to find a new home course. This club checks all the boxes, but it isn’t exactly full of the type of members Larry typically surrounds himself with. Nonetheless, Larry is more than willing to put differences aside to become a member at a top-notch course.

Larry puts on quite the show as he represents himself as the polar opposite of his true self. Taking a page out of George Costanza’s “it’s not a lie if you believe it” playbook.

After choking on the Larry David, a sandwich named after his son, Larry’s father is hospitalized, and it’s determined he needs surgery for an underlying condition. Days before the procedure, Larry tees it up with the surgeon and makes a startling discovery: the surgeon has the yips.

Larry is beside himself and is worried about where else the surgeon’s yips might occur. Can you trust a surgeon who is known not to have the putting yips?

There’s a black swan that calls Larry’s course home and doubles as the club’s mascot. Seemingly out of nowhere, the swan stormed Larry while he set up for a shot just a few feet shy of the course’s pond. Larry is caught off guard and turns to self-defense mode and ultimately kills the swan with his club.

Afterward, Larry plays it cool in the clubhouse during lunch as the rest of the group stresses. They plead to leave when Larry states: “People who aren’t swan killers stay. Have a little lunch. Enjoy themselves. Socialize. Get to know the members. There’s nothing wrong, get it?”

Your foursome is only as strong as its loosest-lipped golfer.

Long before Pace of Play became an issue on the PGA Tour it was at the center of a Curb episode. Norm is the resident slowpoke at the club and Larry’s crew spots him sitting for breakfast at the same time. Larry insists they grab something quick to get out in front of Norm, but his cousin disobeys his wishes and orders up crispy onions that he *has* to have with his meal that holds everything up.

Larry’s worst nightmare becomes a reality when he gets stuck behind Norm. Tensions rise, and Larry chooses to leave the course rather than continue to play at a snail’s place. It’s later revealed that Larry’s on-course outburst may have been the cause of a heart attack that killed Norm.

How does Larry take the news? He books an early tee time to avoid the crowd tomorrow.

Weather reports often affect our golf plans. If the weatherman calls for rain, chances are most of us aren’t going to bother showing up to the course. Well, Larry was faced with this exact scenario and caught his local weatherman in a “Jetstream of bullshit.”

After predicting a washout on TV, Larry shows up to the club only to on a sunny day to discover the weatherman has the course to himself. I’m not going to lie, it’s a genius move. Hell, if I had a job that would allow me to sway golfers to stay home so I could have the course to myself, I would.