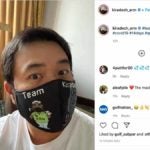 His clothes match the tone of his 10 cars. He owns somewhere around 500 pairs of shoes – Yeezys, the limited edition Adidas sneakers designed by rapper Kanye West, are his favorite – and houses them in their own apartment. He has multiple fancy watches, including a jewel-encrusted Richard Mille valued at $1.5 million, given to him as a gift by the royal family of Brunei.

Kiradech Aphibarnrat’s face mask is decorated with a logo of himself.

The coronavirus pandemic has changed many things. Aphibarnrat’s style has not.

“#teamkiradech #covid19 #14days #quarantine,” the PGA Tour pro wrote Sunday on Instagram under a picture of him wearing the mask in a Bangkok hotel room, his golf bag with the same logo in the background.

There’s comfort in the familiar. Aphibarnrat has needed it. When those 14 days are over, after a long month-plus, he can go home again.

When the PGA canceled play in mid-March after the first round of the Players Championship due to the coronavirus, Kiradech and his wife, Tunyatorn, at first chose to stay at their home in Orlando, the Bangkok Post reported. But as the virus spread, they decided to leave, only to be stopped when Thailand halted all international arrivals as part of preventive measures. Finally, after the Thai government allowed a special flight home on April 17, they began their nearly 10,000-mile journey, touching down two days later.

“This is like a life lesson,” he told the Post. “I’ve been away from golf for so long now. When we were in Orlando, it was scary to go out to meet friends as we were afraid of passing the virus. Everyone has to be safe. It makes you appreciate life and golf more.”

Aphibarnrat’s mandatory 14-day quarantine has been a bit of a struggle – facemask excluded. His wife is in a separate room. The food is average. And his bag doesn’t have golf balls.

“We can’t get friends to send stuff over, and the food here is OK,” he told the Post.

“I’ve got my golf clubs in the room, but I can’t chip or putt as I don’t have any golf balls in the bag. So, I’m just exercising a little bit, resting, playing online games and watching movies to pass the time.”

Aphibarnrat is also uncertain when he’ll return to the Tour, which is scheduled to resume play in June.

He told the Bangkok Post he will “stay at home for a while and shut down.”

“I want to work, I want to play, but I want to be safe as well,” Aphibarnrat said.