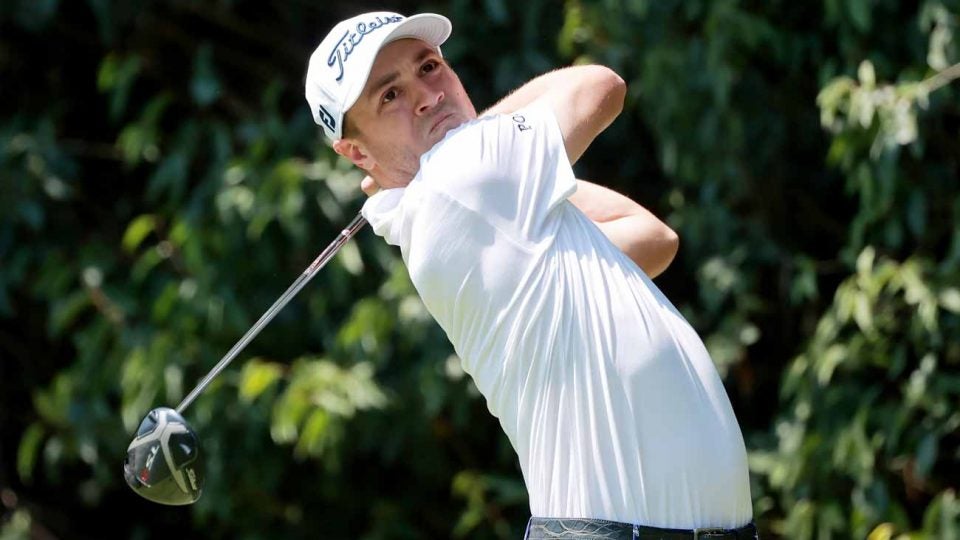 Justin Thomas hits his tee shot on the second hole during the third round of the WGC Mexico Championship.
Getty Images

Justin Thomas held his cap to his face, circled a bit and widened his eyes. He had just bogeyed the 18th hole at the World Golf Championships Mexico Championship on Saturday, and he was focused squarely on the mistake.

He can spend a bit of time on it, as his third round was pretty much errorless elsewhere.

Thomas fired a scorching 6-under 66 to grab a one-stroke lead over Patrick Reed and Erik van Rooyen heading into Sunday’s final round. Three strokes behind Thomas are Rory McIlroy, second-round leader Bryson DeChambeau and Jon Rahm, who shot a 10-under 61, the lowest round of his professional career and a course and tournament best.

Here’s everything you missed from Saturday’s action in Mexico.

Thomas did make one other mistake, bogeying the first. He got it right back with a birdie on the second, then exploded on the back nine, making birdies on the 10th, 11th, 14th, 15th and 17th holes.

The bogey on the 18th dropped him into a momentary tie for the lead with Reed, but Reed matched Thomas’ final-hole bogey to sit one back.

McIlroy, the first-round leader, shot a 3-under 68.

What happened to Bryson DeChambeau?

The second-round leader started strong, as he birdied the first, eagled the second and birdied the fifth. A double bogey on the par-5 sixth — which included his third shot landing in the drink — and struggles on the back nine led to an even-par 71.

Starting the day 10 shots behind DeChambeau, Rahm rocketed into contention with a 10-under 61, the lowest round of his professional career and a course and tournament best. He birdied six of the first seven holes, then shot 5-under on the back nine.

The highlight was a one-hop hole-in-one on the par-3 17, which he punctuated with an excellent club flip.

Interestingly, his round could have been better — he bogeyed the eighth.

Tiger Woods’ pursuit of the PGA Tour’s all-time wins record will have to wait at least another week, as he is taking this week off.

How can I watch Round 4?