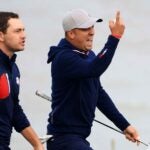 Justin Thomas could close out an all-time comeback on Sunday ... thanks to a little help from Patrick Cantlay.

If you spoke to Justin Thomas around 11 a.m. on Thursday, you would have seen a very different version of the 28-year-old superstar than the one that greeted reporters on Saturday afternoon at the World Wide Technology Championship.

On Saturday, Thomas was jovial, excited even on the heels of his third consecutive round in the 60s in Mayakoba. He was in the press area as one of the tournament’s contenders, preparing for the final round of play just three strokes back of the leader, Viktor Hovland. He laughed as he spoke, using the words ‘great’ and ‘good’ three times to describe his experience for the week.

On Thursday at 11 a.m. though, Thomas was in a decidedly different place. Because around that time, he walked off the 18th green at El Cameleon Golf Club in a state of disarray. He’d stumbled his way out of the gates, making three bogeys (and no birdies) through his opening nine holes on one of the PGA Tour’s easiest setups. On a week in which the cutline was expected to be under par (and would later wind up at 4 under), Thomas’ outward score of 3 over had already placed his chances of making the cut in peril.

He made the turn to the front — his second nine of the day — and flipped the switch, recording six birdies en route to a 3 under finish. From there, Thomas’ week was off the races. He followed up that opening round 68 with rounds of 65 and 64, and heading into Sunday, had placed himself in the penultimate pairing, well within striking distance of his second win of 2021.

So, what (or perhaps more accurately, who) flipped the switch for JT at the turn on Thursday? As it turns out, the comeback can be attributed to one of Thomas’ good buddies (and Ryder Cup partners), Patrick Cantlay. As Thomas explained after his round on Saturday, it was Cantlay’s performance in a similar situation at the BMW Championship that helped spur him to believe a turnaround was possible.

“I’m very, very proud of myself to be where I’m at,” Thomas said. “It’s funny, I played with Cantlay the first two rounds of the BMW this year and he had a very similar start. He was off to a very, very sluggish start.”

Of course, Thomas is referencing Cantlay’s daring victory at the BMW Championship. That week, Cantlay overcame an even-par start through nine holes at Caves Valley and went on to shoot 27 under, eventually besting Bryson DeChambeau in a dramatic playoff.

“He was hitting it really bad and scrambling for pars and bogeys, and on an extremely easy golf course like that, I think he was a couple over around the turn, and we all know what happened that week,” Thomas said. “So I kind of remind myself of that because I watched him just stay patient and plod his way along.”

It’s still early to tell whether that lesson will translate to a win for JT as it did for “Patty Ice,” but there’s no question that Thomas can pass along some of the credit to his Ryder Cup partner for the turnaround. As for whether that results in a portion of the winner’s check being diverted to Cantlay’s bank account, well, it’s still too soon to say.

“I know this is a course, you can get on crazy kinds of runs out here,” Thomas said. “It feels good to know I haven’t really done anything special, but I’ve just kind of checked the boxes and done a lot of things I need to do and put ourselves in a good spot.”