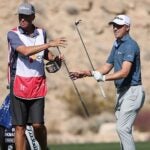 Bones Mackay is back on the bag for Justin Thomas, but now in a full-time capacity for the first time.

Marriage is hard. But the marriage between player and caddie, now THAT’s challenging.

There are plenty of similarities between the spousal relationship and the espousal relationship required between both player and caddie (meaning: the requirement that both members espouse their unvarnished opinions en route to the best strategic decision). Both relationships require trust, dedication, constant communication and yes, a dash of love. There will be occasionally hurt feelings and there will be mistakes, but so long as the above is true, the player-caddie marriage will endure.

It is easy to find someone to carry your golf bag, yes, but it is not easy to find a tried-and-true caddie. But the best relationships? They last for years, decades even.

Justin Thomas is hopeful that he’s found a new partner through both sickness and health. His new looper’s name is Jim “Bones” Mackay, and after a brief but memorable stint as an on-course analyst with NBC, Mackay is back on the bag, helping to form the “other” half of golf’s highest-profile new tandem.

Now, there’s some history between these two lovebirds. Back last year, Thomas won at the WGC-FedEx St. Jude Invitational with Mackay on the bag, and had Bones join him for a handful of other starts while Jimmy Johnson, his usual caddie, was away tending to health-related issues. They know each other well, and have a demonstrated history of success together.

But this week, at the CJ Cup in Las Vegas, they’re taking the leap for the first time. It’s an exciting development for both players, to be sure, but Thomas admits, they’re still firmly in the honeymoon phase.

“I think it’s going to be something where we’ll just kind of learn, you know?” Thomas said prior to the start of play Wednesday. “Obviously I’m comfortable right now and I think he’s comfortable now, but I’m sure as more and more events go on, like anything, you just get better and better. At least that’s the hope.”

There’s reason for optimism, for both player and caddie. Prior history would seem to indicate this tandem has the recipe for success, but also, there’s hope of untapped potential for the future.

Thomas is a major champion and one of the best players in the game, but to date, his career has stopped short of “historic” standards. Of course, Mackay joined Phil Mickelson’s bag at a similar stage in Lefty’s career, and was by his side as he ascended into the six-time major champion we know today.

For Thomas, it’s hard not to be entranced by the possibility dangling before him.

“I think that’s the exciting part about it is that we’re already very confident, I feel like we can do a lot of great things,” Thomas said. “But at the same time, we’re just going to continue to learn and know each other better and better and hopefully get more comfortable.”

It won’t be easy, but hey, it’s plenty better than flying solo.

“Yeah, we feel very comfortable, but there’s always going to be things that, like I said, we’re going to learn about each other as we go on,” Thomas said. “I think we’re both very excited and looking forward to that.”