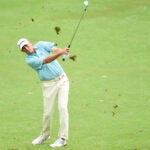 Jim Herman finished in the top 5 in Strokes Gained: Off the Tee, Approaching the Green and Putting this week.

Jim Herman was a shot outside the cutline Friday afternoon with just four holes to play. It was a typical position for him this year, which has been largely a struggle. But something clicked in his game.

The 42-year-old rattled off three straight birdies to make the weekend, and absolutely took off from there. Herman shot 124 on the weekend and played his final 24 holes in 12 under (including a bogey!) to reach 21 under, a mark no one else could match. “It’s going to be tough to put in words exactly what this means,” Herman said to Amanda Balionis shortly afterward.

It means a lot of things. For one, Herman will extend his full status on the PGA Tour. It will also jump him back into the top 100 in the world ranking. (He had fallen outside the top 300.) It will also continue his PGA Tour season at least two more weeks. Herman had made just 7 of 18 cuts this season and had no top 25 finishes entering this week, but after a victory he’s now ranked 54th in the FedEx Cup standings. That’ll guarantee him a spot in the first two events of the FedEx Cup Playoffs, as well as a spot in the 2021 Masters, which will be his second trip to Augusta National. No doubt there will be some celebrating tonight.

Herman was stellar in just about every facet by the time the weekend closed. He finished in the top 5 in the field in Strokes Gained: Off the Tee, Approaching the Green and Putting. The only place he lacked in was around the green, but hit darn near every green — 32 of 36 on the weekend — and you won’t need to be good around the greens.

“61-63, some of the best golf I’ve ever played,” Herman said later. “Best golf I’ve played in my life obviously. Last summer was pretty close, but these two rounds, pretty special.”