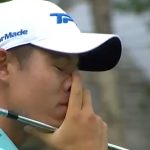 Collin Morikawa on Sunday after his whiffed pitch shot on the 6th hole at Muirfield Village Golf Club.

Collin Morikawa, while lining up his shot from just right of the green on the par-4 6th at Muirfield Village, walked behind the flag, then walked back. Then kept walking. His ball was nestled down in the thick rough, and now he just couldn’t quite remember where he left it.

“That is really ugly in there, thick, dense,” analyst Dottie Pepper said during CBS’ broadcast of Sunday’s final round of the Memorial. “Yep, can’t find it.”

It wouldn’t get prettier.

Morikawa, after eventually finding his ball, took five practice swings ahead of the 40-foot pitch, looked up at the pin and opened up his clubface for his third shot. He swung. He hit the grass underneath the ball. He missed the ball above the grass. The PGA Tour’s scoreboard generously marked it as going “1 inch.”

“I believe that was a whiff,” Pepper said on the broadcast.

“It’s a body blow,” analyst Frank Nobilo said. “We’ve all done it. It’s how you feel afterwards. You have to play the same shot again.”

Morikawa, then in a share of the lead with Patrick Cantlay and Scottie Scheffler, stepped away, took a small bite into the shaft of the wedge, then put his right hand on his face and shut his eyes. After about 40 seconds, he’d hit again, dropping his ball about 10 feet short of the cup.

“He’s opened the face and trying to play this siding action,” Faldo said of the whiff. “Sometimes you have to examine the lie and think how am I going to get the face through the ball on a level, obviously a couple of inches off the ground. Not easy. So when you open the face, obviously you reduce the depth of the clubface as well, so — but you got to try it because you’re only trying to lob the thing two or three paces max.”