Is Tiger Woods playing the Masters? We finally have an answer. 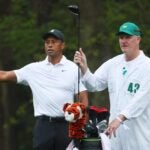 Tiger Woods practices at Augusta National ahead of the 2022 Masters.

The 2022 Masters at Augusta National gets underway on Thursday, April 7, and everyone is excited. But one question has dominated thoughts and columns for two weeks now: Is Tiger Woods playing the Masters?

This year, as always, the hype for the Masters is huge. Each year it’s the first of golf’s four men’s major championships, and the first opportunity for players to attain glory that will last a lifetime. It’s also arguably the biggest tournament in golf, the one many players want to win more than any other.

But Tiger Woods’ will-he or won’t-he saga has taken the anticipation for this year’s event to new heights. Why? Because the 15-time major champion (and five-time Masters champion) has not played pro golf since 2020, after a devastating car crash in February 2021 nearly resulted in the amputation of his right leg.

After he showed up and played the PNC Championship with his son Charlie in December, the questions about when Tiger would make his return began in earnest.

So that begs the question: Will he or won’t he? As of now, yes, Tiger Woods is playing the 2022 Masters.

Woods flew to Augusta last week for a practice round with Charlie and Justin Thomas, the first sign that he was considering playing. Then, on Sunday, Tiger went back to Augusta for more practice, and tweeted that whether he would play the Masters would be a “game-time decision.”

After two more days of practice, Woods sat before reporters to field questions on Tuesday, and confirmed that, barring an injury setback, he would play at Augusta this week, and he believes he can win.

On Tuesday afternoon, Augusta National released Round 1 tee times for Thursday. There was Tiger Woods’ name, right next to Louis Oosthuizen and Joaquin Niemann at 11:04 a.m. ET.