It took what felt like an eternity for Phil Mickelson — and Tiger Woods, for that matter — to make a putt of any significance during The Match, but when it mattered during extra holes, it was the 48-year-old left-hander who converted a four-footer for birdie, on the 22nd hole, to walk away with $9 million under the lights in Las Vegas.

Mickelson opted to stick with the same equipment setup he used in Napa, including the 34-inch Odyssey “Stroke Lab Nine” prototype putter that bumped his Versa #9 (White-Black-White) from the bag. When comparing Mickelson’s prototype to his previous gamer, there are a few noticeable differences — namely the two adjustable sole weights and a prototype shaft that reportedly helped Mickelson improve the consistency of his putting stroke. 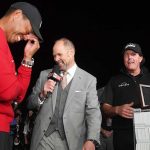 You may also like Tour Confidential: Why The Match worked (and why it didn’t)

The shaft appears to be a blend of steel and carbon fiber, two materials that have been used by other manufacturers in the past for putter shafts, most recently with Barney Adams’ Breakthrough Golf Technology Stability shaft. What remains to be seen is how it differs from the competition.

Mickelson also chose to go with an insert that hasn’t been seen on other Stroke Lab putters spotted on Tour. The heel-shafted version Danny Willett used to win in Dubai featured Odyssey’s White Hot Microhinge insert; Mickelson’s had what looked to be a more traditional White Hot version.

GET FIT FOR CUSTOM GOLF CLUBS TO TRANSFORM YOUR GAME TODAY

To the winner goes the…iron covers? On Sunday at the Hong Kong Open, Aaron Rai logged his maiden European Tour victory with arguably one of the most bizarre sights in the bag for a professional golfer: Iron covers. Normally reserved for the mid- to high-handicapper who doesn’t want to ding his new sticks, Rai chose to keep his TaylorMade Tour Preferred MB irons hidden under a set of TaylorMade covers.

For those hoping to procure a set of Rai’s covers online, they can actually be had for a reasonable price. A recent eBay search turned up a set that went for $23 dollars on the open market. So if you’re into filling your bag with gear the pros play, here’s your chance to do it for less than a few sleeves of balls.

You’re golden, Tiger: Tiger Woods missed out on a massive payday at Shadow Creek but still managed to make headlines while wearing a custom pair of black and gold Nike golf shoes that had social media buzzing during the match.

Woods noted during the broadcast that the gold accents and sole were a nod to the Vegas Golden Knights hockey team, who advanced to the Stanley Cup finals in their first season as an expansion franchise. Along with being the team’s colors, gold just happens to be synonymous with Las Vegas, where the match was contested.

While the shoes popped on television, it’s unlikely Nike will release an identical version of Woods’ Air Zoom TW71 kicks for public consumption.

Second time’s the charm for Pieters: Professional golfers and amateurs have different definitions for success and failure. Thomas Pieters finished T12 during the European Tour’s season-ending event while using an Odyssey O-Works #1 Wide for the first time, but the respectable showing wasn’t enough to keep the new flat stick from getting the hook a week later at the World Cup of Golf.

Instead, Pieters chose to employ a traditional Anser-style Toulon Austin blade with the same multi-material shaft Phil Mickelson and Danny Willett are using at the moment.

The new shaft/head combo played a critical role on the back nine during the final round, where Pieters made an important par save just after the turn on 10, and followed it up with a birdie on 11 that shifted the moment in favor of the Belgian squad.

“When Thomas made the putt on hole No. 10 and the birdie he made on 11, those two putts were massive,” said teammate Thomas Detry. “I think that was the key moment because there it could easily go — I mean, 11 is one of the toughest holes on the course. 10, it was a sliding putt, not easy, so we could have easily gone bogey, bogey and we went par, birdie.”