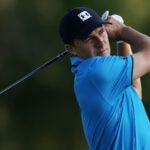 Jordan Spieth took a few short steps toward Hideki Matsuyama’s right on the 1st green at Winged Foot Golf Club on Friday afternoon. Matsuyama was maybe an inch off the green and 39 feet below the hole on the back-to-front sloping green, and he had decided that his best option was to chip his ball past the pin and let it trickle back. Spieth and Matsuyama watched.

The ball started about 15 feet past the hole. A few feet into its descent, it was sliding a little left. Spieth, a handful of feet away from his playing partner now, raised his left hand, which was holding his putter, and gestured it up and down three times. He wanted it to move back right. It moved back right.

A few feet farther into the ball’s fall, it was now moving right of the hole. So Spieth moved his helping hands. He raised his right one. He wanted the ball to move left. It moved back left.

Spieth had started on the back nine and bogeyed his seventh, eighth and ninth holes during the second round of the U.S. Open to stumble to a six-over 41 for his first nine. He was 6 feet away on his 10th from a fourth straight bogey. He would not make the cut at the U.S. Open, and his three-plus-year winless drought would continue.

Matsuyama’s ball dropped into the center of the cup.

Spieth turned to Matsuyama. Matsuyama turned to Spieth. Spieth smiled and laughed. Matsuyama smiled and raised both arms. Their other playing partner, Patrick Reed – who would go on to hold the second-round lead – raised his putter.

“It was one of those birdies that don’t happen very often,” Matsuyama said after his round. “Again, I wasn’t putting it very well, and I could have putted it, but I thought, well, we’ll just use the backstop, and it rolled in.”

Spieth would go on to bogey the hole and two others and add a double on his way to an 11-over 81 and a 14-over total. He’ll continue to work. He’ll continue to search. The low scores that had guided Spieth to three major championships and 11 victories total are gone.

His joy is not.

“There’s a lot that’s off,” Spieth said after Thursday’s first round. “I’m not really sure. If I knew, I’d fix it. So I’m kind of just – kind of working through it and looking forward to having a little more time off to figure it out. I mean, yeah, I’m late behind it. The second I try to get back out in front of, it’s hooking. Standing on a tee at the U.S. Open and not exactly knowing where the ball is going to go is not a great feeling. I know you guys probably haven’t experienced that before, but it’s not incredibly enjoyable.

WATCH: Justin Thomas blasts a shot and a nearby home blasts Celine Dion