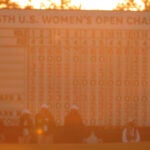 The sun sets Saturday on the leaderboard at the U.S. Women's Open.

Hinako Shibuno pounded ball after ball after ball on the Champions Golf Club range, each swing acting like a shovel, either to unearth what she had just lost, or to throw dirt on what she had just found. She had sprinted out to a three-shot lead after two rounds of the U.S. Women’s Open, then tripped in Saturday’s third, stumbling to a three-over 74, and her lead was now one. By the end of her practice session, the sun had left Houston, and she was hours from her Sunday final-round tee time.

Only, the sun never really came back.

And Shibuno is still hours from her final-round tee time.

Sunday play was moved to Monday when storms moved through the Houston area, with 18 players, including Shibuno, yet to tee off. Who does the delay help the most? Try the player who could use a little more time to find her way, said a former Women’s Open Championship winner.

“The one person who I do think this benefits, above everybody else, is Hinako Shibuno,” Karen Stupples said Sunday on Golf Channel’s Golf Central. “We saw how much of an issue she was having on that driving range last night, just really struggling to get to grips with her game. She has a whole day now to fix it, to get it right, to work on it and to regain that confidence so she can go out again tomorrow for a full 18 holes and see what she’s got.”

For Shibuno’s part, the work has seemingly already worked.

When she walked off the 18th green on Saturday with her fourth bogey of the round — one more than she made in the first two rounds combined — Shibuno said, through an interpreter, she “was very nervous.” “Because I was on top of everybody, that’s why,” she said.

When she left Sunday, that lead was still there. But the nerves weren’t.

“I’m not nervous now like I was yesterday,” Shibuno told our Zephyr Melton. “I’ve calmed down a little bit.”

Come Monday, Stupples said, the nerves will likely return. But so will the calm. Shibuno will likely have a combination of concern and composure.

“Sleeping on an overnight lead at a U.S. Women’s Open is tough when it’s just one night,” Stupples said on Golf Central. “But now you’ve got to do it two nights in a row. I mean, that’s going to be a lot of nervous energy going on there for the people who are at the top of this leaderboard.

“But I also think how much easier it’s going to be for them, too, because they know exactly where the hole locations are going to be tomorrow, they know where the tees will be placed, they know how to plan for this golf course — they’re going to set up a good plan of attack.”