Incredible as it may seem, we are finally back on track at the Zurich Classic, with the third round complete on the appointed day. (If you’ve been following along, you’ll recall that the last two days were spent playing catch-up from Thursday’s seven-and-a-half hour weather delay.)

Here’s everything you missed from Saturday’s action at TPC Louisiana.

News
Jason Dufner plays to the New Orleans crowd with ‘Saints Got Robbed’ hat at Zurich Classic
Hurray! The third round is complete — on time!

On Friday, golf was played from sunup to sundown, and on Saturday, it was much the same. The second round re-started at 7:00 a.m. local time for the players who still needed to finish, and the third round began at 11:30 a.m. local time off of split tees.

Mother Nature cooperated, the round was completed, and we head into Sunday with just 18 holes left to play — and a clear forecast to boot.

Because of the delays, the cut wasn’t made until Saturday morning, when the second round was finally complete.

And unfortunately some much-anticipated pairings had to say goodbye. Here they are, in order of score, from best to worst (but short of the cutline of eight under par nonetheless). 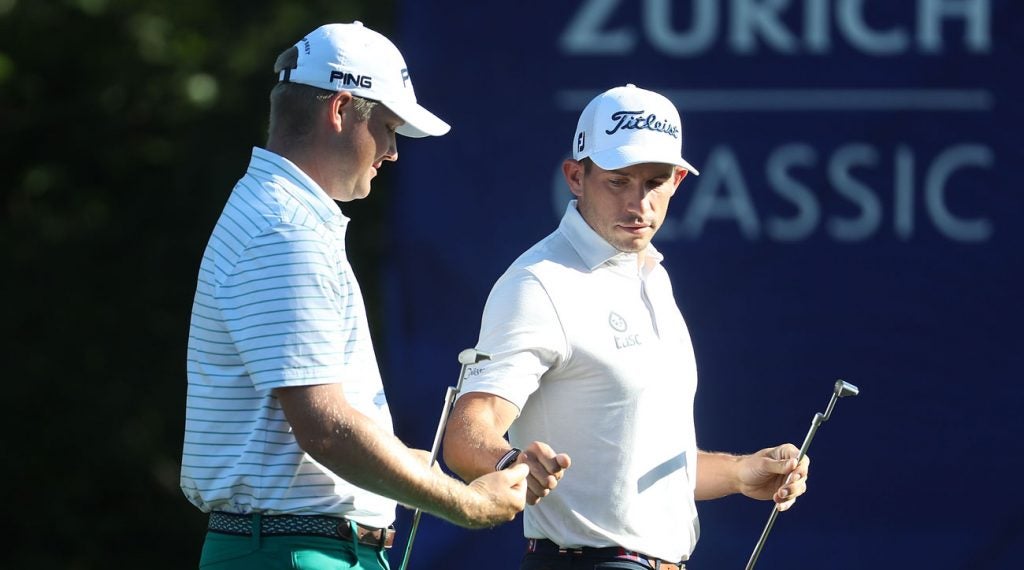 Trey Mullinax and Scott Stallings share the Zurich Classic lead heading into the final round.
Gett Images
Stallings/Mullinax and Rahm/Palmer share the lead

Stallings and Mullinax had a stellar day during Saturday’s fourball (best ball) round, shooting 10 under par together to launch themselves up to share the top of the leaderboard by one shot.

Stallings has three career Tour wins on his resume and two top-10 finishes so far this season, while Mullinax is still seeking his first Tour title but has four top-1os this season.

Rahm and Palmer, meanwhile, have been consistently solid in both fourball and foursomes, shooting 64-65-64 over three rounds. They duo was eight under on Saturday.

Driver off the deck. ?@JonRahmPGA sets up a ? with this beauty. pic.twitter.com/kb6sONp6Z3

News
‘Old Jon would have lost it’: Jon Rahm proud of composure on disappointing Sunday
Branden Grace and Justin Harding are lurking

The South African team of Grace and Harding shot the round of the day today, 11 under, to launch themselves eight spots up the leaderboard into solo third. They trail the lead by a single shot heading into Sunday’s notoriously tough foursomes (alternate shot) format.