How golf — yes, golf! — was the last sport standing 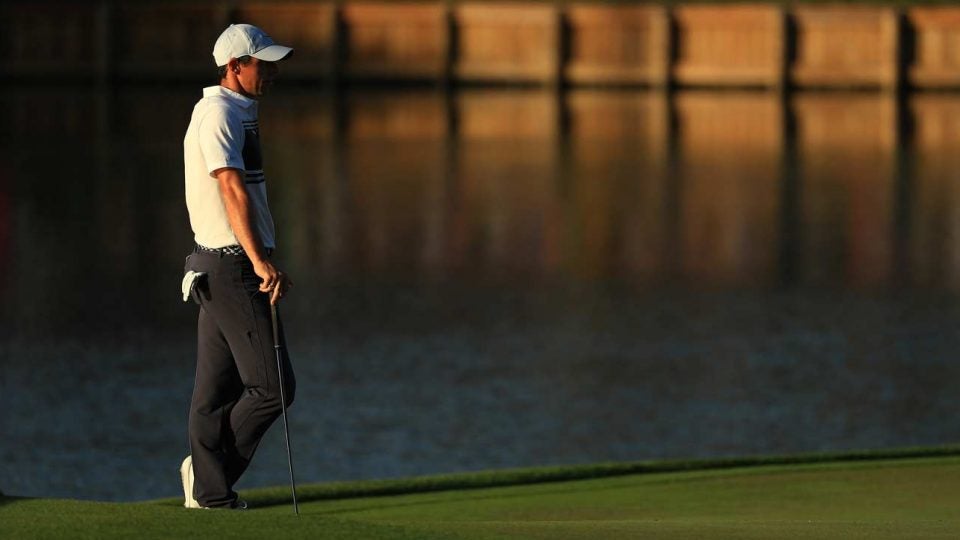 Rory McIlroy was among the last players to finish on Thursday evening.
Getty Images

Wednesday, the game’s response to the coronavirus pandemic lagged well behind. As cities banned mass gatherings, the NBA pressed pause on its season and the president limited travel, the PGA Tour deliberated its Hall-of-Fame class, celebrated its Chainsmokers concert from the night before and prepped for its biggest event. In other words, golf stuck to the schedule.

That was particularly significant because across the sporting world, nobody else was sticking to their schedules. There was a seismic shift in the everyday lives of everyday Americans. Offices were closed. Schools shuttered. People were adjusting to life on pause. But in Ponte Vedra Beach, the show went on. Whether that was a sign of confident leadership or out-of-touch inflexibility depended on your perspective — and, realistically, it’s still not clear. But one thing was clear: By Thursday afternoon, golf stood alone.

As questions mounted Wednesday evening, the Tour sent its players a text: “We will keep you informed as info becomes available,” it read. “Please be prepared to play tomorrow. Round 1 is on schedule.”

Still, the league held out on making a public statement. As a result, speculation ran wild. Would fans be banned from the Players? The tournament called off? The season put on hold? It wasn’t until after midnight — 12:17 a.m., per my email inbox — that the Tour sent out an official statement. When it did, the message was this: “With the information currently available, the Players Championship will continue as scheduled.”

On Thursday, fans showed up for the Players, as they do every Players Thursday. This year’s crop was slightly lacking in number and gusto, and they received no autographs or high-fives. “Air fist bumps, just for now,” Dustin Johnson said. But besides that? It was a fairly typical first round.

“It felt normal the whole day. There was no difference,” Justin Thomas said. The sun came out. Players started piling up birdies. Tour stuff.

Around mid-morning, word rolled in that change was on the way. Sure enough, at a noon press conference commissioner Jay Monahan announced that for the remainder of the Players — plus the Valspar, the WGC-Match Play and the Valero Texas Open — play would go on, but without spectators.

Several phrases stuck out from his brief statement and the extended Q&A that followed. Phrases like “essential personnel only.” “Fluid and dynamic situation.” “We contemplated everything.” “We’re comfortable having our players continue.” “We’re an outdoor sport.” More on that last one later.

In a vacuum, the announcement was a radical move. No fans? The fans, Thomas said, literally make the Players what it is. For that matter, “they make ‘em all.” Think about that: the fans make ‘em all. No roars through the trees? Nobody to witness a triumphant fist-pump? Nobody to jack up the intensity of an intense moment? Golf has gone fan-free before, for an odd round here or there. Not as a long-term plan, though — that was radical indeed.

But in the context of the world at large, the move hardly registered. Banning fans was small potatoes. It was the move the Golden State Warriors had made about four moves ago. Golf had fallen behind.

All the other dominos

March is, in many ways, a gateway to the biggest events in all of sports. The NBA ramps up towards the playoffs, as does the NHL. March Madness allows college hoops fever to sweep the nation. The Masters is right around the corner. Baseball’s Opening Day, too.

The NBA screeched to an indefinite halt on Wednesday evening when Rudy Gobert of the Utah Jazz (and later teammate Donovan Mitchell) tested positive for COVID-19. The NCAA first began to break apart with the cancellation of the Ivy League postseason tournaments on Tuesday before other conference tournaments followed suit, one by one. Then came the final word: There would be no more NCAA Championships in the winter or the spring, period. March Madness — plus everything else.

The NHL got on the same page as the NBA, announcing an immediate halt to its season, to be resumed “as soon as it is appropriate and prudent.” Major League Baseball cancelled the rest of Spring Training and pushed back the beginning of the season. The MLS? On hold. Even the XFL, hardly a league you’d associate with caution, announced an immediate stoppage. Need I go on?

Putting those acronymmed sports leagues in a list like that works as a summary. What it doesn’t properly capture is the emotional significance of taking all of those things away. It’s tempting to wave a hand, in a time like this, and say that sports are insignificant. But sports are hugely, hugely important. Sports fans are creatures of ritual, and taking away some of our favorite rituals — March Madness, for goodness’ sake! — means taking away hope, community, inspiration. It means realizing how easily something you love can disappear.

But the golf, for now, goes on.

“It’s different than other sports — right?”

So asked Jordan Spieth following his opening round. Part of the answer is, of course, “Right!” Because he has a point. Golf is never quite like the other sports, and this is no exception. Here’s the case for golf being more virus-proof, put together by various players:

“Our players are making their way over 400 acres,” said Jay Monahan.

“You can justify it with the lack of physical contact and the space that you have around,” said Spieth.

“Heck, we’re probably better off continuing to play tournaments than not, than being inside,” said Webb Simpson.

You get the idea. Coming off the course, pros were generally in favor of the idea of keeping fans at home, and also generally in favor of the idea of continuing to play. The prestige of the tournament likely has something to do with that, as does the $15 million dollar purse, but there’s another interesting ingredient, too: normalcy. If golfers can continue to play golf, they’ll undoubtedly feel a little more hopeful about the state of things. Change is hard. Because they’ve got a strong case — that coronavirus does not transmit as easily in open-air venues where players can stay pretty far apart from each other — normalcy is an appealing option.

But it’s not quite so simple.

Later in the day, a wave of pros came in who’d had more time to process the day’s events. It was no coincidence that they’d considered the downsides to playing on, too. Bernd Wiesberger called the fan ban a good first step, but admitted he was worried what else could happen. “To be quite honest, I think it will go further than that,” he said. “If you look at the bigger picture, nobody knows if somebody is dragging it into our locker room and everything, and then everyone is going to be in quarantine.”

That’s the big “what if.” What if someone on Tour gets the virus? What if they already have it? Plus, continuing to hold events forces players to travel. For the large percentage of pros who still fly commercial, that means more exposure to more people. “You never know who they’re going to run into or what could happen,” Brooks Koepka said. (We’re not sure if he ever flies commercial, but the point stands.)

Considering the “what-ifs” makes you realize just how precarious the PGA Tour’s position really is. Just one case away from having to answer a lot of big questions. After his round, Rory McIlroy was, once again, the strongest voice in the room. He called for every Tour player to get tested. He said he doesn’t see how Augusta could consider allowing spectators at this point. And if a pro or caddie tests positive? McIlroy didn’t flinch.

Then, with an announcement just before 10 p.m. on Thursday night, everything changed. The PGA Tour joined the rest of the sporting world, cancelling the Players Championship and the next three events, too. Those doomsday quarantine scenarios will remain, mercifully, just “what-ifs.”

Difficult decisions lie ahead, no doubt. Unknowns. Outside pressures. Had golf gone on, we’d have enjoyed the game, through gritted teeth and mixed emotions. Instead, golf stood alone for just a few hours.

At the very least, a fitting week to be stuck on an island.