Xander Schauffele and Patrick Reed both had chances to win the Tournament of Champions at Kapalua. Neither did. As they came off the Plantation Course on a windy Hawaiian Sunday, both players used some similar phraseology: they both “got gusted” during important putts down the stretch. This may not be the first time players have talked about getting “gusted” — but we’re fairly sure we’ve never heard it in back-to-back interviews. New decade, new words, I guess?

Schauffele gave the first interview, in which he reflected back on needing two putts from 35 feet to win the event outright in regulation. “Yeah, I think I got gusted, honestly,” he said. “On the initial putt, it went — I honestly thought it was going to go like four feet by, but it caught some speed, and once it started breaking right with the wind, it kept going.”

In short, what Schauffele is referring to is the effect of a sudden gust of wind changing the normal course of play. Even though his first putt broke right as it was trickling past the hole, Schauffele later implied that most of that break had been due to the wind. On his next putt, he factored in that same wind, but got no break and never even sniffed the hole on a seven-footer. He three-putted his first playoff hole from 100 feet for another disappointing par and found himself eliminated.

“I kind of did everything I was supposed to do until the last moment, which sucks,” he said. “But this is another learning experience, and I guess I’ll have to work on some wind putting.” 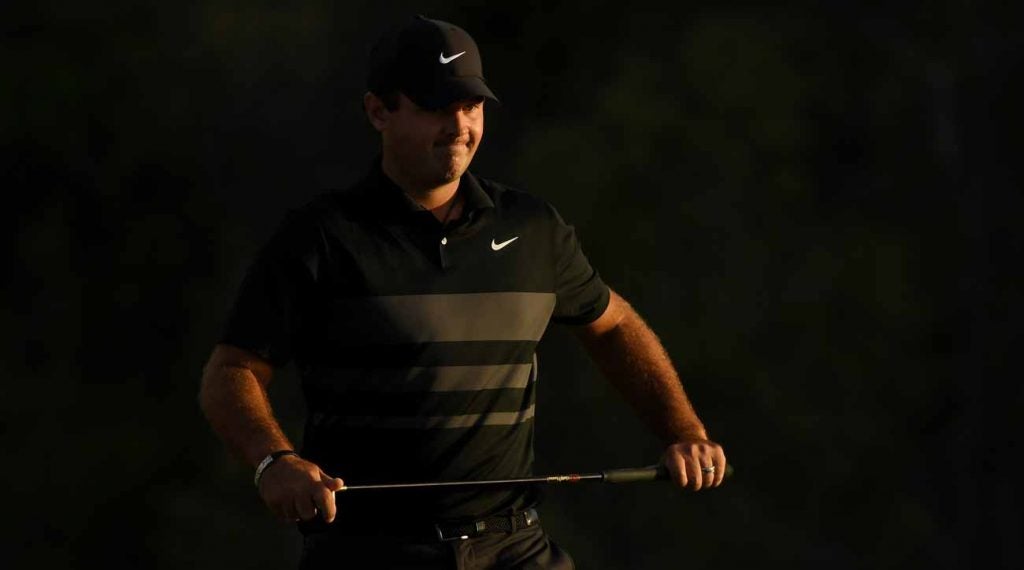 Patrick Reed and Xander Schauffele each referred to getting "gusted" late in Sunday's round.
Getty Images

Let’s turn our attention, then, to Patrick Reed. After posting the round of the day, a seven-under 66, Reed backdoored his way into a playoff and nearly a win. But he just missed a birdie putt on the second playoff hole and then missed another one on the third playoff hole, opening the door for Justin Thomas to win with one final birdie.

“Unfortunately I had two putts really to close it, and one of them I got gusted on, and then this last one with the wind and the break, just got me again,” Reed said. There it is again: “gusted.” (Remember to save this phrase for your weekend game!) He expanded on the point, describing his birdie try on playoff hole No. 2. “The wind picked up right when we hit it and it made the ball stay straighter because it was more downwind and it actually didn’t break at all,” he said. As for the final putt?

“I needed to make that one to tie and obviously continue for an extra hole, and right after I hit it a gust came and the ball ended up missing by a cup and it was actually outside [Thomas’] mark.”

The breezes are famous ’round Kapalua this time of year. Golf Channel’s Mark Rolfing has turned cult hero for his mentions of the trade winds, which traditionally blow from the north and east, versus the Kona winds, which come from the south and west.

Tournaments
Tour Confidential: Who will be World No. 1 at the end of 2020?

So what are we to make of the new verbiage? The use of passive voice calls to mind “getting robbed,” or “getting a bad break” (or “getting Punk’d,” for that matter). Sports fans typically favor players taking complete responsibility; that was certainly the reaction of Chris DiMarco, who lashed out at Reed on Twitter, “Own your stuff. Always excuses. Just say you cheated and you got beat!” (He also called him a bad name.)

But it’s certainly unfair to dismiss their reasoning outright, too. Every golfer knows just how difficult it is to navigate strong winds, and putting in particular requires a stability that’s harder when it’s gusty. What’s harder to suss out is whether “gusting” happens before impact, affecting one’s stroke, or after impact, affecting the actual break of the ball.

Either way, a key takeaway from this week is just how fun golf is to watch when the wind blows. We famously yearn for it every year at the Open Championship; perhaps we should root for it every week. Look no further than the top of Sunday’s leaderboard and you’ll see that the best players in the world seem like they’re the best at surviving “getting gusted” — no matter what they call it.