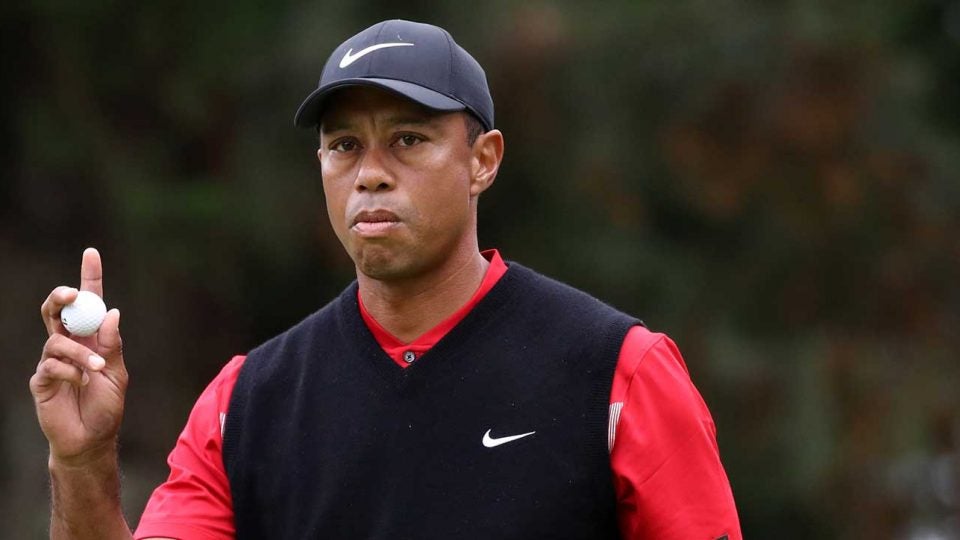 Tiger Woods walks off the 14th green during the final round of the Zozo Championship on Monday in Japan. Woods won for his 82nd career PGA Tour victory.
Getty Images

Tiger Woods is on the cusp of history at the Zozo Championship in Chiba, Japan. When the fourth round resumes on Monday morning at Accordia Golf Narashino Country Club, Woods, at 18 under for the tournament, will have a three-shot lead with just seven holes to play. If he can hold on and claim his 82nd PGA Tour title, he will tie Sam Snead’s all-time wins record.

Woods’s nearest pursuer is the local favorite, Hideki Matsuyama, who is at 15 under. Six back of Woods, at 12 under, are U.S. Open champion Gary Woodland and Sungjae Im of South Korea.

Follow along here for insights and opinions from GOLF contributing writer Josh Sens.

FULL ZOZO LEADERBOARD | WHAT A TIGER WIN WOULD MEAN

**Refresh this page for the latest updates**

8:35 p.m. EST: No dramatic fist-pumps. It’s a fairly subdued celebration for Tiger. Smiles. Hand shakes. And that’s that. An historic win but an understated response from Woods. See you at the Presidents Cup. Tiger the player has no doubt put himself on Tiger the captain’s radar.

8:33 p.m. EST: Here goes . . .Tiger lining up his birdie putt. And . .he drains it. In this, the first PGA Tour event ever held in Japan, Tiger Woods nabs his 82nd career victory. The sushi is going to taste good tonight.

8:31 p.m. EST: It’s a long bunker shot for Tiger, across the width of the green, but it’s a good lie and it’s not complicated. Here goes. A nice splash and he’s out. The ball checks up about 9 feet short of the cup. It’s just a formality now.

8:30 p.m. EST: If Tiger is feeling giddy, he’s not showing it. Little expression as he walks towards his ball. Game face still one. For now.

8:27 p.m. EST: Tiger’s fairway wood approach finds the front bunker. Simple math: if he can get down in four from there, he wins.

8:23 p.m. EST: Hideki hits a nice lag putt and will tap in for par. The lead is still two. Tiger is in the fairway and basically just needs to stay upright for the next few minutes to catch Sam Snead with 82 career wins.

8:20 p.m. EST: Stranger things have happened. Hideki could still hole his third from the bunker for eagle. But that’s something Tiger does to other people, not the other way around . . Hideki takes too little sand. A poor shot that flies well long. He’ll have to make a bomb for birdie.

8: 18 p.m. EST: And Tiger, back on the tee, pulls three-wood. Playing from the right side of the tee again, looking for that same cut he seems so comfortable with. Yep. Fairway.

8: 15 p.m. EST: He catches it clean but he needed to cut and it doesn’t. The ball finds the green-side bunker, left. A sand save gets him a birdie that will almost certainly not be enough to catch Woods.

8:08 p.m. EST: Hideki is studying his lie in the bunker and now eyeing the yardage book. He’s going with the aggressive option, with a fairway food. He’s waiting for the green to clear.

8:03 EST: Looking ahead, the 18th is a par-5. Eagle not out of the question. But unlikely for Matsuyama, who just found a fairway bunker off the tee.

8:01 p.m. EST: His approach is a safe play to the center of the green. No need for anything spectacular here.

8:00 p.m. EST Tiger is back in the fairway, doing that nine-mile-stare thing he does when he’s in the zone.

7:51 p.m. EST: Hideki is on the 17th green, with a chance at birdie, and Tiger is on the tee of the same hole, a 491-yard par-4. Tiger tees it from the right side of the box, playing a cut and piping it. He’s perfectly positioned in the fairway.

7:47 p.m. EST: That was not his greatest putt of all time. Whether it was a mis-hit or a mis-read, hard to say. But it does not scare the cup. But it’s also an easy par, so two-shot lead with two to play.

7:45 p.m. EST: On the live broadcast, meanwhile, announcers reference the “age-old debate” as to who is the greatest of all time. We are really still debating this? The GOAT is putting now. Looking to stretch his lead.

7:41 p.m. EST: This one is playing 181, with water left and the pin on the left side of the green. Tiger plays a peach, just right of the flag, pin high. He’ll be putting on a similar line to the one Hideki just had, but from slightly closer. Maybe 12 feet. We can’t call this a done deal just yet, but, as Dylan sang, “It’s getting there.”

7:40 p.m. EST: Nope. His putt drifts just left and misses. And as that happens, Hideki drains a curling putt on 16 for birdie. The lead is now 2. Tiger is on 16 tee, a par-three with water left.

7:36 p.m. EST: It’s Tiger’s turn. He can open up a four-shot lead if this one goes. Four with three to play? He should be able to handle that.

7:31 p.m. EST: Woods has a placid look as he goes through his routine, chewing gum and taking gentle practice swings. He waggles and goes. This one is a beauty. A wedge to just below the pin. Another good look at birdie. Let’s call it 8 feet.

7:30 p.m. EST: I lied. Tiger’s ball is just a pace off the fairway. First cut. Not a bad lie and a good angle in, playing from the right side of the fairway to a pin cut left.

7:26 p.m. EST: If you said Ben Hogan, with 64, give yourself a hearty pat on the back and accept our congratulations. We owe you a beer next time we see you.

7:24 p.m. EST: So, as we watch what is looking like a coronation march, a little trivia. Tiger would tie Sam Snead’s career victory number with 82. Who has the next most career wins?

7:21 p.m. EST: And here we go. . . .It’s slightly down hill and looks like it wants to drift a little to his right. And . .. dead center! Birdie. Lead is back to three. Tiger gives a little wave to the crowd and a smile to his caddie. Ho-hum.

7:18 p.m. EST: At this point, it’s a two-man race: Hideki and Tiger. Gary Woodland, who is playing with Woods, is six back. No one else in the picture has enough holes left to pose any kind of threat. As he waits to putt, Tiger is swiveling his hips, looking to stay loose. I said he has 9 feet. It might be a bit more. But we’ve seen him make a zillion of these.

7:15 p.m. EST: Playing from the rough on his third, Tiger gouges a wedge that lands just short of the pin but has no spin. It runs past, leaving him maybe 9 feet. A good shot from that lie.

7:10 p.m. EST: And Hideki, looking to play spoiler, pushes his birdie putt on 14, grazing the cup but missing. That was a bullet dodged for Tiger, whose lead coulda/shoulda been cut to just 1. Speaking of Tiger, he just played his second on the par-5 14, coming up behind Hideki. It’s a fairway wood and it scoots into rough. He’ll have less than a full wedge in from there, but it’s a poor lie.

7:08 p.m. EST: At this point, has Tiger already done enough to convince the Presidents Cup captain that he deserves a spot as a captain’s pick? Oh, wait. He IS the captain.

7:06 p.m. EST: The par-5 14 measure 608 yards. Reachable with a very good drive. Tiger has found the fairway, but he’s well back of Keegan Bradley, who found the short grass, too. Not likely the go zone from there.

7:04 p.m. EST: With the poor long iron approach on 12, Tiger slammed his club in frustration. But with that subpar putt on the 13th, there was little emotion. Just a slightly sad look that most of us who miss those kind of putts all the time can relate to. Up head, meanwhile, Hideki has spun a wedge to three feet and will have just a little more than a kick-in for birdie.

7:02 p.m. EST: And that was an indifferent-looking putt. About seven feet, breaking left to right. And Tiger didn’t scare the hole. His ball curled well right. Tap-in par, but a missed opportunity. He remains at 17-under, two clear of Hideki.

6:55 p.m. EST: Back to the 13th, which is actually playing 156 yards, with the pin set toward the back left. Both Bradley and Woodland have found the green but not especially close. Tiger decides to show them how it’s done, flighting a nine-iron down and sticking it to .. . .let’s call it 7 feet. A great look at birdie to get back the stroke he lost on 12.

6:50 p.m. EST: The 13th is a short par-3. 141 yards. Tiger and his group (he’s paired with Keegan Bradley and Gary Woodland) will head there now. And the cellphones and Tiger mascots in the gallery will follow.

6:47 p.m. EST: Tiger, after a finding the fairway, caught a long iron from 210 heavy and left it short, in the bunker. His sand blast from there, to a pin atop a ridge, got rejected by the slope and rolled back. He now has a long bid for par that drifts just left. That’s a bogey. The lead is down to 2. Matsuyama, playing just ahead, just parred the par-3 13th.

6:39 p.m. EST:  The cell phones are out in full force in the galleries, as are the Tiger mascot outfits. Looks like a Furry convention.

6:35 p.m. EST: The 12th is no slouch. 490 yards. Tiger plays a cut up the left side. Or least that’s the idea. It doesn’t cut much but takes a friendly bounce, hopping out of the first cut and landing  in the fairway. Good start. He’s playing with Keegan Bradley, who is a full 10 shots back. Hideki Matsuyama is the Tiger’s closest pursuer, three shots behind.

6:33 p.m. EST: If only Tiger had a history as a solid closer, we all might feel better about his chances, right? But at least there’s this: he’s never lost a three shot lead with seven holes to play.

6:30 p.m. EST: Buckle up, everybody. Tiger is on the tee on the 12th, getting ready to go. Who knew he wanted to a spot in the Presidents Cup so badly?