Having your dad on the bag at a U.S. Open is a golf experience that’s hard to rival 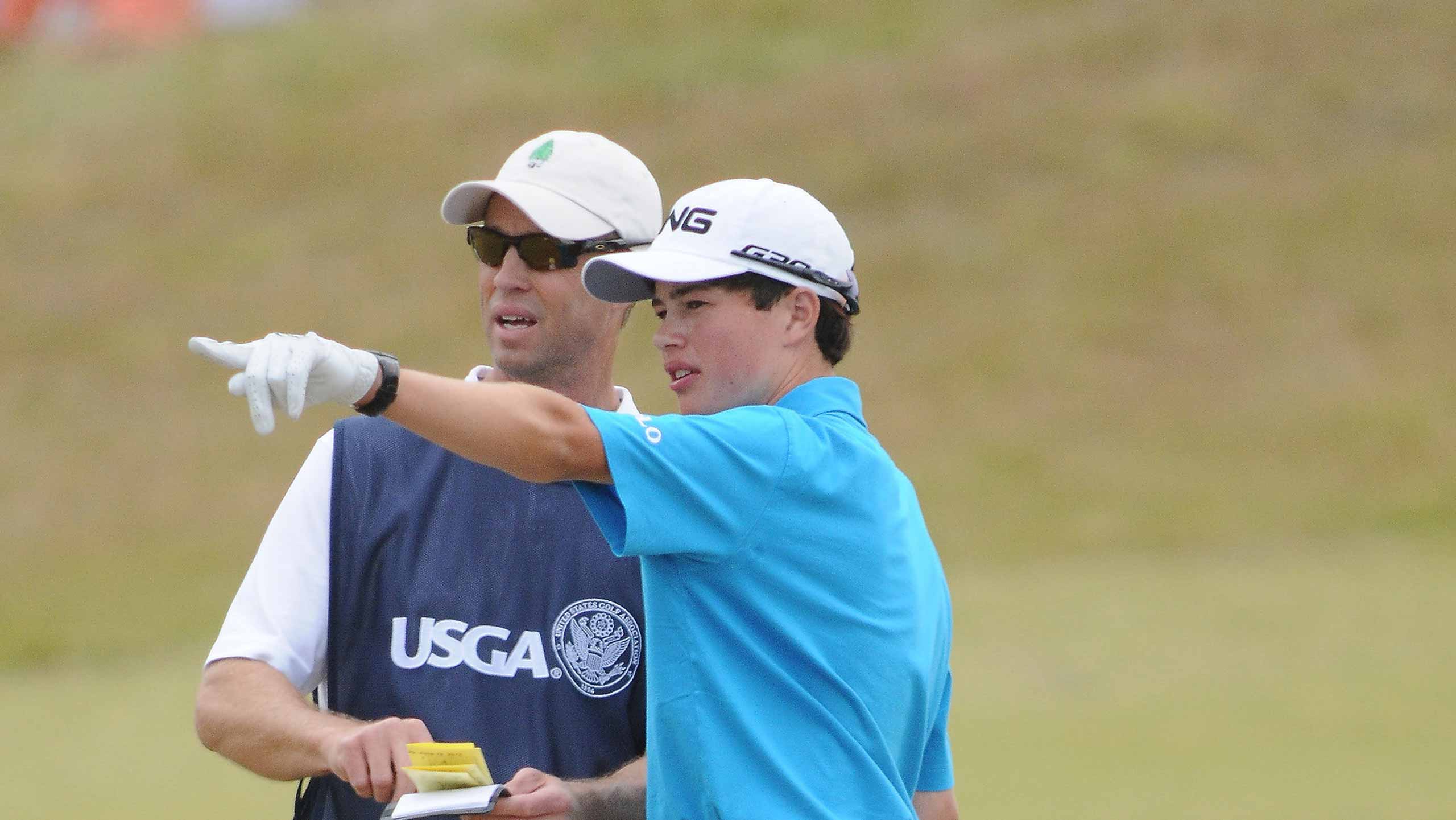 Cole Hammer qualified to play in the U.S. Open as a teenager, and had dad on the bag.

Going back to the Tom Morrises, golf is the story of fathers and sons. Many, if not most, of us are introduced to the game by our dads. In professional golf, the sweetest moments often involve a fatherly hug; two of the most iconic images of Tiger Woods’s career have him as the receiver and then, a lifetime later, the giver. The connection between dads and their kids is at its most heartfelt during the U.S. Open, which traditionally falls during the week of Father’s Day. Recall the tearful goodbye Mike Furyk said to his son Jim before sending him out to win the 2003 Open, or a victorious Justin Rose, on the final green at Merion, pointing to the sky in tribute to his late father, Ken.

For a lucky few families, this connection is brought inside the ropes, when fathers caddie for their sons at the U.S. Open.

“It’s a pretty amazing feeling,” says Maverick McNealy, who had his father Scott as his looper at the ’14 Open. “When you first start playing golf, it’s amazing how good your dad is — how far he can hit, how much control has. As you get older and better, beating him becomes a huge goal. And then you’re playing in one of the most important tournaments in the world and your dad is there by your side.” The roles have changed but only a little bit, because that dad is still offering advice and support, as he always has.

The father-son caddie teams at the U.S. Open tend to happen when amateurs qualify for the national championship, as they don’t have grizzled caddies to call upon. Cole Hammer was a tender 15-year-old high school sophomore when his father Gregg carried his bag at Chambers Bay, in 2015. It is a golfing family: both Gregg and his wife Allison have won multiple club championships at River Oaks, in Houston, where another works as an assistant pro. When he pegged it in the national championship Cole weighed a mere 125 lbs. and was younger than the teenaged standard-bearer in the group.

Naturally, he had a few starstruck moments. “He’s enjoying this,” Gregg said that week. “We were playing [a practice round with Jordan Spieth] and he said, ‘Dad, do you see how many people are out here?’” What did it mean to have his old man by his side during such a nerve-wracking moment? “It means the world to me,” Cole said.

The dads who toil between the ropes are a varied lot. McNealy was a Silicon Valley CEO with a net worth in the high nine figures. Mike DeMorat, who caddied for his son Mickey in 2018, carried the rank of chief with the Broward County Sheriff’s Department in Florida. David Young, on the bag for son Cameron last year, is the head pro at heralded Sleepy Hollow Country Club, in New York. David is a strong player in his own right; as recently as 2016 he advanced through U.S. Open local qualifying. Davis Love III, no stranger to the Open as a competitor, looped for his son, Dru, at Erin Hills in 2017.

Jeff Ghim immigrated from South Korea, hoping to give his family a better life. He couldn’t afford fancy country club memberships or far-flung junior tournaments for his son Doug so, at their home in suburban Chicago, he built a backyard hitting bay made out of tennis nets. Jeff was a constant on the bag as Doug turned into a big-time amateur, and was so consumed by the role that he was once spotted limping down the fairway, having kicked a tree in frustration after a wayward shot by his son.

Reaching the 2017 U.S. Amateur final together punched the Ghims’ ticket to the U.S. Open at Shinnecock Hills. Doug said his goal that week was to give his dad the ultimate Father’s Day present: a tee time at the Open. But after a couple of tough days on a tough course in Southampton, N.Y., it was clear they were not going to make the weekend. Playing the 17th hole of the second round, the magnitude of the moment hit the Ghims: Their run was over.

Doug would miss the cut and then turn pro, and he would be hiring a grizzled Tour caddie to help him navigate the road ahead. Jeff had been by his son’s side for so many emotional moments. Now both were fighting back tears as they reflected on the journey. As Doug later recalled, “I told him there are a lot of heroes that I got to meet that week, whether it was Tiger, Phil, Jason Day, Jordan Spieth. But I wanted him to know that he’s always been my hero, and the person that I looked up to the most.”