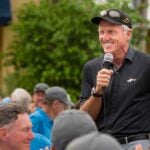 In December, Greg Norman will host the 32nd annual QBE Shootout, where he and dozens of Tour pros continue to take aim at pediatric cancer.

Charity is usually a two-way street — a cause and effect. For those who give generously, there’s often a moment in their life of deep emotional impact, something that moved them to help others. For Greg Norman, that moment came more than 30 years ago, at MD Anderson Cancer Center, in Houston, where he watched an unthinkable scene unfold. Norman’s brother-in-law at the time, Dr. Richard Andrassy, had invited the 20-time PGA Tour champion to witness his work in MD Anderson’s pediatric unit. The day’s mission: life-saving surgery on a one-year-old with cancer. The indelible image: an imperiled infant on an operating table. “Back then, the success rate for kids surviving cancer was around 20 percent,” Norman remembers. “I asked my brother-in-law, ‘How can we improve this?’ Obviously, the answer was research and money. I thought, let’s see if we can get that 20 percent success rate up to 80 percent, and someday to a point where every child survives cancer. That’s how it all started.”

Thirty-seven years later, Norman was watching again, looking out over a ballroom full of people — among them Tony Finau, Gary Woodland and Bryson DeChambeau — at the Ritz Carlton in Naples, Fla. The Shark was hosting a fundraising gala the night before the QBE Shootout, his annual charity golf event. This is where Norman’s life goes from impacted to impactful. At Naples’ Tiburón Golf Club, where “the Shark Shootout” takes place each year, the pros are the main attraction. But this night Norman was acknowledging a different group of superstars — young cancer survivors like Joseph Campione.

At just three weeks old, Campione was diagnosed with rhabdomyosarcoma, a type of bone cancer that afflicts children. After months of chemotherapy and radiation, he was declared cancer-free in 2007. Much of his medical treatment was funded with money from the Shootout. This December marks the 32nd anniversary of the event, which, in partnership with CureSearch for Children’s Cancer, has raised more than $14 million for kids like Joseph.

“It’s a lot of money, but I can guarantee you it’s put toward tremendous things,” says the now-13-year-old Campione. “I had a doctor show me a picture of [my] tumor. Then he showed me the ‘after’ picture, and with the help of a combination of nontoxic drugs the tumor was gone. Things like that are possible because of CureSearch and the money Greg Norman has raised.”

More than three decades of work with kids in need — and their families as well.

“Mr. Norman has never met most of these folks who benefit from the Shootout,” says Rocky Campione, Joseph’s dad. “But he’s having an impact on our lives. It’s possible he doesn’t know the true depth of it, and he’s doing it anyway.”

Norman views it more humbly. “Knock on wood, I’ve been a pretty healthy guy,” he says. “And [I’m] blessed in a lot of ways. Wanting to give back is innate in people. For me it’s pretty simple. Because I can, I do.”

Despite the seriousness of its mission, the QBE Shootout is a good time; a tournament during the Tour’s “off season” that showcases competitive golf in a chill setting. That’s what gets the game’s top pros to Naples each December, but it’s kids like Joseph who inspire them. Shortly after entering high school this fall, he participated in CureSearch’s “Ultimate Hike,” where he too discovered that two-way street, raising money for kids just like him.

From impacted … to impactful.