Michael Strahan Q&A: The Hall of Famer on the most money he’s bet on the course, his dream foursome and more 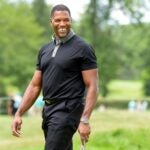 Michael Strahan has a wager on the line for every round.

Pro football Hall of Famer Michael Strahan is now the hardest-working man in show business. But he still has time to take your money.

GOLF: Who would be in your dream foursome?

Michael Strahan: Tiger Woods because he’s… Tiger Woods! Condoleezza Rice, I’ve seen her on the golf course out at Cypress Point and I know she’s a member of Augusta, so she’d be the one to get us on a nice course. And Obama.

Me, first. Terry Bradshaw would be No. 2. Jimmy Johnson would be No. 3 if he played. Curt Menefee would be 4. Howie Long would be No. 5 even though he has a terrible back. And Jay Glazer would be last because I don’t know if he can hit those kids’ clubs far.

You grew up in Germany. I can’t imagine you played there much as a kid. When did you first pick up a club?

In 1996. I kept being asked to play and I didn’t really want to, but I thought it might be a good way to meet people. And I got hooked immediately.

How decent are you?

Every time. But it’s not about the money. I can wager a buck a hole. It’s more about the competition. I just want something to hold over your head at the end.

What’s the most you’ve ever bet on a round?

Probably about three grand. I don’t want to make it to the point where anyone’s shaking to death over a one-foot putt.

With all of your jobs — Fox NFL Sunday, Good Morning America, The $100,000 Pyramid, and your businesses — where do you find the time to play?

What I’ve learned to do is look at the weather report for the week and allocate certain days so that when I’m done with GMA I make sure not to book anything. Like on a Thursday, I will leave GMA, go play a round, then go to my garage in Jersey and go straight to Thursday Night Football. I’ll plan my days around golf.

Where do you zip out to on those days?

Oh, Tom Brady, for sure! A birdie feels fantastic, a hole in one feels amazing, but sacking Tom Brady feels incredible! You get to hit another man, take him down to the ground and get paid for it and not go to jail, that’s fantastic. You feel like a gladiator. You feel like a lion who’s just taken a gazelle down. You’ve captured your prize.

Can you wear a Super Bowl ring when you play golf or does that get in the way of your swing?

Absolutely gets in the way of your swing. It’s too big. It’s hard to wear that thing every day just walking down the street! When we were designing the ring, they were asking if we wanted it big or small, and I raised my hand and said that I wanted a 10-table ring. And they said what’s a 10-table ring? It’s a ring you can you can see from 10 tables away when you walk into a restaurant.

You have your athleisure line coming to Men’s Wearhouse in March. Do you have golf wear?

Oh, yeah. Polos, pullovers, you name it. I always wear my own stuff when I’m on the golf course. Playing good is No. 1, but looking good doesn’t hurt. To quote my friend Deion Sanders, You look good, you feel good. You feel good, you play good. You play good, they pay good.

Would you design the Masters’ green jacket?

Absolutely! That would be the sweetest Masters jacket you’ve ever seen!

Would you ever design Payne Stewart knickers for your line?

If the market called for Payne Stewart knickers, then knickers there will be. That’s the thing I love, when you looked at Payne Stewart that was him expressing himself. You can express yourself on the golf course. I wear patterns and colors on the golf course that I would never wear anywhere else. I would wear knickers, sure. They look comfortable.

You’re 6’5”, 250 — I imagine the second you step up to the first tee, looky-loos are expecting you to crush it. Are they right or do you disappoint them?

I don’t disappoint at all. I’m a big enough hitter to make you go, Whoa! As a big guy, people don’t expect your swing to be smooth. They expect you to look like Barkley.

What’s the best advice you ever got?

The best advice I ever got actually came from the Michael Jordan documentary. When all the guys are sitting there at practice one day and they’re all trying to hit three pointers from the scorer’s table. Everybody’s missing, and then they come to Michael and go, ‘Are you worried about it?’ Trying to mess with him. And he goes: ‘Why would I be worried about a shot I haven’t taken yet?’ And he sinks it. In golf, you stand over the ball and get all nervous, but why worry about a shot you haven’t taken yet?

Who plays you in the movie biopic of your life?

I would say Denzel, but he’s a little older than I am. I guess whoever’s willing to put a prosthetic gap in their teeth.

How much would you pay to shave 10 points off your golf game forever?

More than I have in the bank.