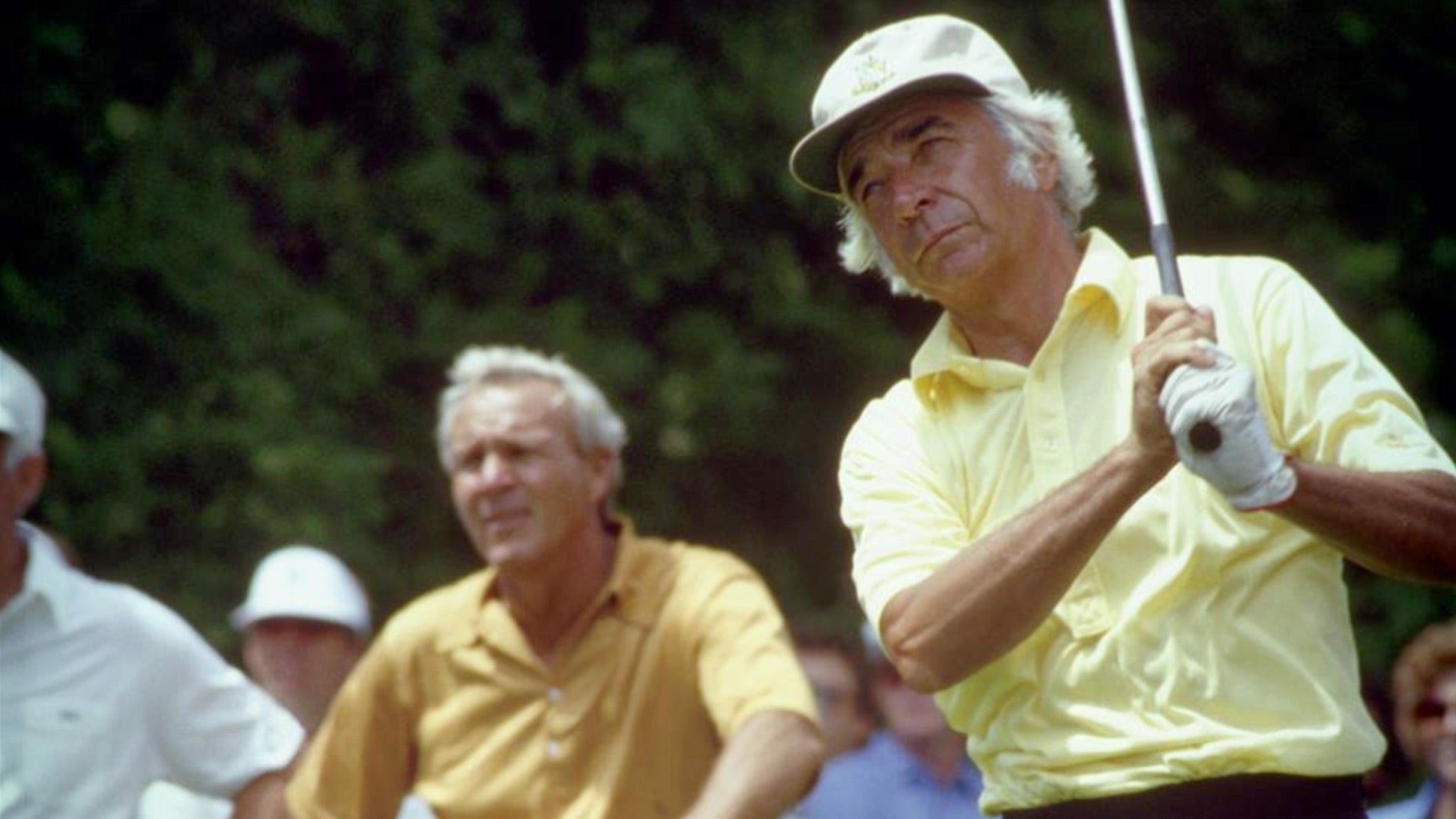 Bud Chapman tees off as Arnold Palmer looks on.

Bud Chapman won big and, at times, lost even bigger. None of it seemed to bother him. Perhaps that’s why he was so beloved.

Chapman was a brilliant artist, talented golfer, colorful character and gifted storyteller. He made piles of money in commercial art and later with his “Infamous 18 Golf Holes” — a series of stunning watercolor fantasy holes mapped out around the globe — and lost loads in other endeavors, including a 1970s quest south to find gold.

When he died of a heart attack on July 9 at age 97, Chapman left behind a legacy matched by few in the golf world. The Minnesota native shot his age nearly 4,000 times and attempted to qualify for 47 U.S. Opens, sometimes falling short in heartbreaking fashion.

He was known to apply to some golf tournaments several times (forgetting he already had) and to show up for events on the wrong week. When he was inducted into the Minnesota Golf Hall of Fame in the 1990s, he went to the wrong club for the ceremony. He used a 54-inch driver — before the USGA reduced the limit to 48 inches — and despised headcovers. Too fussy. Same with golf bag zippers, so he always kept his pockets open; playing partners wondered how he didn’t lose more belongings.

He liked duck hunting and fishing and dogs. He was a skilled pilot and kind person. A kid at heart, really. His scorecards were sloppy and he scribbled swing tips on the leftover white space. He left candy bars in his golf bag. He once delayed a trip back home to Minnesota from his winter place in Florida because Disney World was unveiling a new ride, and he had to check it out. That was just a few years ago.

“He almost had an innocence of a child,” David Chapman said the other day. David is one of Bud’s four kids, along with Greg, Julie and Jennifer. “That’s how he lived life. He woke up and everything was about fun.”

Loyal H. “Bud” Chapman grew up painting with his mother and later morphed his skills into a successful commercial art business. In the early 1970s he met a prospector and the lure of buried treasure and gold in the New Mexico mountains was too great to resist, but unsuccessful excursions left Chapman near broke. He needed another way to make money. Then he had an idea.

“Why not paint 18 of the greatest golf holes that nobody can conceive, and paint them so real that nobody will even know if they’re real or not?” he told the Minneapolis Star Tribune.

So, Chapman painted breathtaking golf holes in exciting and gorgeous settings around the globe. He sent them to Golf Digest, but instead of asking for payment he requested a free ad. His business boomed. He completed his 18 infamous holes in 1982, and they drew attention from other national publications, including Readers Digest, GOLF Magazine and others. His work has long been a fixture in country-club locker rooms, public-course clubhouses, in books, calendars and more. You name it.

A talented artist, no doubt. But Chapman was also a wizard on the golf course. According to David Chapman, Bud shot his age 3,899 times, the first when he was 68 (Bud kept track). But that’s selling the feat short: he actually shot well below his age thousands of times.

Chapman won the Minnesota Senior Amateur twice and the Minnesota Senior Open once. He was named the Minnesota Golf Association’s Senior Player of the Year in three different decades. In 1983 he qualified for the U.S. Senior Open at Hazeltine National, and through 15 holes was the tournament leader. (Billy Casper won.) He was the honorary starter the last two years for what is now the CRMC Championship, a Mackenzie Tour event.

“If he shot 84 or 64, you wouldn’t know the difference,” David said. “He just loved the game. Everyone just loved playing with Bud Chapman.”

Chapman grew up caddying at posh Interlachen Country Club — often grabbing the bag for legendary women’s player Patty Berg for 75 cents a loop (plus tip) — and later became a member at both Hazeltine and Minneapolis Golf Club. He and his wife raised their family in townhomes off the 17th tee and later the 10th hole at MGC, although Bud split time in Florida later in his life.

Stories of Bud’s adventures have been well-documented. Everyone has one. Some are so perfect they are hard to believe — some details fuzzy or a prisoner of time — but there are bits of truth everywhere.

There was that one time when he was a teenager and drove to Chicago for a big tournament with Mildred “Mitzi” Hanson, who would later become his wife. On the first day of the tournament, Bud was so nervous in front of the huge gallery he topped his opening tee shot, only to recover and take the first-round lead. Bud and Mitzi came to the course the next day, but only to watch. The following day’s local paper questioned where the first-round leader had gone, and when a reporter caught up to Bud on the course, Bud explained why. He had run out of money. His last few dollars went to his caddie the first day, and he didn’t have any more cash to pay another caddie. (According to David, the real snag came a couple of days earlier on their way to the tournament, when Bud let Mitzi, who didn’t have a license, drive the car. They got pulled over, Mitzi was thrown in jail and Bud had to use almost everything they had to bail her out.)

On many occasions, his game preceded him. He was an Army pilot in World War II and flew B-29s, but never went overseas. The war ended with him on the airstrip in Tucson, Ariz., ready to take off for a mission. Yet there were rumors the generals were reluctant to send him anyway. One day he was called into a superior’s office and thought he was about to catch an earful — he always had trouble keeping his bed tidy — but the colonel had other things on his mind. “Bud, I hear you got your golf clubs with you and that you are a pretty good player?” he asked. The bosses didn’t want to lose their golfing partner.

Qualifying for the U.S. Open became his white whale, although he didn’t start the pursuit until he was in his 40s. He was featured during a U.S. Open broadcast in 2005. That year he was 82, the oldest of some 9,000 entrants vying for a spot at Pinehurst; he carried his own bag on a cold and rainy day to shoot 86, missing out by 14. He did twice advance through local qualifying to sectionals. One year, in Chicago, he needed to play the last two holes in even par to qualify, but he doubled the 17th. Another close call came in Detroit.

“I was four or five shots ahead of Sam Snead and Frank Stranahan in the last round with two holes to play when I got to a par-4,” Chapman told Sports Illustrated in a 1998 profile. “I drove the darn thing in the morning round, and I’m getting ready to hit when the caddie says, ‘Mr. Chapman, you’ve got it made. Just take an iron.’ I thanked him because it was the right thing to do. So I pulled out a 2-iron and hit it straight into the worst garbage you could imagine.

“I’m still OK,” he continued. “All I need is a double or triple on the last hole to qualify because I had that lead. It was a par-3, and jeez, I hit this 6-iron, and I thought it was going in the hole. It imbedded in the bank in front of the green, but not too bad, and the pin was only about 10 feet away. The imbedded ball rule wasn’t invented yet, so I go up there and just tap the ball to get it out — and it goes in a little deeper. So I tap it again, and it goes in deeper. [Laughs] Now it’s starting to get serious. I did that four or five times, and finally I closed the blade like a sand shot and exploded it out to about 40 feet. From there I four-putted and missed qualifying by one.”

He added, playfully: “I have a tendency to choke.”

Joe Stansberry, a 65-year-old Minnesotan, had a decorated amateur career and played briefly on some pro tours. He was in his 20s when he first played with Chapman and they’ve been friends since. They last played together in February at Seminole Lake Country Club, where Chapman was a regular in Tuesday and Thursday men’s games, usually for $20. Stansberry recalls Chapman becoming agitated when he suddenly chunked a couple of shots in a row.

“He was still trying to improve at 97 years old,” Stansberry said.

Later that night they had dinner with a small group. Bud told a story about watching Ben Hogan on the range one afternoon long ago. He was in awe as one of the greatest ball-strikers of all-time blasted shot after shot high into the sky. Afterward he told Hogan how impressed he was.

“And he turned to me and looks me straight in the eye, and I knew he meant it, and he says, ‘If I don’t play better than this tomorrow, I’m withdrawing from the tournament,’” Bud recalled. “I was so embarrassed he went that way and I went this way.” (Hogan lost to Sam Snead in a playoff.)

On Sunday, three days after their father’s death, David, Greg and two friends went to Brookview Golf Course in the Twin Cities. They all used Bud’s Ping G400 with the full-length Code Blue 48-inch shaft (no headcover) off the 1st tee. Everyone striped their in-memoriam blast down the center, except for David. He pulled his left and made double bogey. That’s golf: perfect game, impossible to perfect. Bud Chapman knew that.