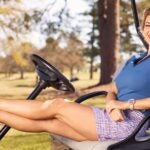 Amanda Renner has become a mainstay on CBS golf broadcasts.

If you’ve set foot on a golf course over the past two years, you’ve likely noticed the obvious: The game is booming. That includes women, too, but the momentum is apparent in another realm: leadership roles. As you’ll see in this package — in which we’ll feature eight women in the game — many prestigious jobs in the sport are now occupied by females. From holding down national, front-facing gigs to excelling behind the scenes at golf’s biggest equipment companies, women are making their mark in fields traditionally dominated by men. At GOLF, we celebrate the essential role these women play in making the game better, and more inclusive, for all of us.

Since joining the CBS Sports team of golf broadcasters in 2017, Amanda Renner (née Balionis) has had the opportunity to interview the game’s biggest names on prime-time TV — and has become golf media’s brightest star because of it.

One of the things that makes Renner so obviously good at her job is her genuine rapport with the players she’s interviewing, a talent that makes her work look easy when it’s anything but.

“If you’re not prepared — in terms of reading everything, talking to everyone in their camp — I don’t think you get the best out of a player,” Renner says. “You have to really do your homework to get something different out of them, and, to me, that’s the coolest part.”

Renner’s skill was perfectly on display at the ultra-isolated November 2020 Masters, where she was able to coax some uncharacteristic emotion out of winner Dustin Johnson. The thrill of that experience is with her to this day.

“I get goose bumps even thinking about it,” she says. “Like, Oh my gosh, I get to do this and be in a moment that was iconic. The fact that Dustin let his guard down made it even more special.”

Renner’s ready smile and affable nature make her an approachable figure for players and viewers alike, and she says the ability to both relate and be relatable has been key to her professional climb. In 2018, Renner expanded her broadcast duties to include sideline reporting for the NFL, which led to her first Super Bowl gig in 2019.

“I love being able to get to know people on a deeper level,” she says. “That’s not just on camera, that’s in my life. I see myself as a sports fan who has the privilege of being able to, hopefully, bring fans at home the answer to exactly what they’re wondering.”