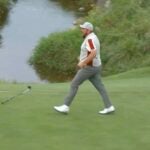 Shane Lowry on Saturday at Whistling Straits, after his match-saving putt.

HAVEN, Wis. — Shane Lowry has a history of being the man for the moment. His first professional win came as an amateur, in a playoff in his native Irish Open. His biggest win came at the Open Championship upon its return to the island of Ireland. And with the Ryder Cup fast slipping out of European hands, he provided a moment that salvaged some pride from this contest.

Lowry, whose three consecutive birdies were only good enough for a 1-up lead in his four-ball match, came to the 18th hole with that cushion intact. But it was threatened: Americans opponents Tony Finau and Harris English were in for par. Partner Tyrrell Hatton had squandered his position from the fairway with a poor iron shot and subsequent bunker shot, and Lowry — who had driven into a fairway bunker — had 11 feet left to halve the hole and win the match.

What Lowry told himself

Nothing had been going Europe’s way all week, but Saturday, he woke up feeling inspired.

And he was playing like a man inspired. Which is why, moments before he hit his pivotal putt, he left himself with one simple message.

His best, it turns out, was just enough.