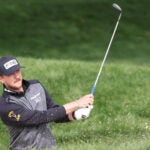 Mackenzie Hughes hits a shot from a bunker during a practice round for last week's U.S. Open.

This is advice about advice. Don’t just listen to me. Or Jessica Marksbury. Or Alan Bastable or Dylan Dethier. (Though, if you’ve listened to Alan and Dylan for golf-pick wisdom over these past 15 weeks, Lord help you.)

Listen to a lot of advisers.

A host of other golf sites are full of golf-betting insight. The PGA Tour itself is even. A Google search of “PGA Tour picks” brings up over 5 million results. You might even stumble across some of Josh Berhow’s stone-cold locks from earlier this season.

You’re seeking confirmation for your pick. And refutation. Pick, and then pick it apart. You want to hear the pros and the cons. You need yes men and no men. Plural.

This week, the PGA Tour is playing the Corales Puntacana Resort & Club Championship at Corales Golf Club in the Dominican Republic. Since I started this story with advice, I’ll end it with some, too.

To-win: Mackenzie Hughes, +2,000. Hughes has been a cut-making machine since June (with the exception of last week’s U.S. Open) and made it all the way to the Tour Championship this year. He also finished second to G-Mac at this event last year, so he gets my pick this week.

Prop: Patrick Rodgers, Top 20, +225. Rodgers has three Top 20s since the Tour’s restart, and I’m confident this week will be his fourth.

To-win: Mackenzie Hughes, +2,000. He tied for second here last year and has played well over the past month.

Top 10: Henrik Stenson, +400. I choose to believe he is just too good a golfer not to play well against a weak field.

Top 10: Kristoffer Ventura, +400. Has logged six top 25s on the PGA Tour and Korn Ferry in his past nine starts. Don’t see him slowing down this week.

To-win: Will Zalatoris, +1,400. Grabbing Zalatoris before noted Korn Ferry Tour expert Zephyr Melton can stake his claim. The guy has played great golf all year on the KFT, and he’s coming off a T-6 finish at the Open. There isn’t much not to like about his chances this week.

Top 10: Adam Long, +300. Hard to go too far off the board in a tournament lacking big names, but Long seems like he has the right mix of prior performance.

To-win: Will Zalatoris, +1,200. The best player on the KFT has made a name for himself in limited starts on the PGA Tour. This week, he becomes more than a name to watch and becomes a name on a trophy.

Top 10: Kiradech Aphibarnrat, +1,200. Life’s too short not to root for Barnrat to succeed.

Prop: Winning margin, after a playoff, +400. After a blowout result last week, we’re due for a tight tournament.

To-win: Charles Howell III, +2,000. Like certain comets, Charles Howell wins don’t come around often. But the man is a cut-making (and money-making) machine, and I like him to be in the mix against what isn’t exactly the toughest field of the year.

Top 10: Will Zalatoris, +225. A solid showing at Winged Foot this past week should put him in a good frame to attack a much more vulnerable course.

Prop: Winning margin, after a playoff, +400. I’d like to pretend there’s something scientific to this pick, but there is nothing cybermetric about it. It just kinda feels like we’re due for a tie after regulation.

To-win: Will Zalatoris, +1,400. Gotta go with the hot hand! Dr. Z — pretty sure no one calls him that — was already having a good year on the Korn Ferry Tour when he tied for sixth at Winged Foot. He’s bound for another good week.

Prop: Winning margin, three strokes, +600. I like this one in a blowout, and I like these odds even better.

To-win: James Hahn, +6,600. In his last start, at the Safeway Open, he finished in the top 10, so he’s in decent recent form. He’s also a two-time PGA Tour winner, so we know he can get the job done in crunch time. Big-time value here, and I need to start making a comeback.

Top 10: Sepp Straka, +400. If you’ve been following along with our picks this year, then you know I’m a Straka believer. Granted, I haven’t made any money on him, but this is the week he proves me right.

Prop: Winning margin, after a playoff, +400. There have been a couple blowouts recently, and I feel like we’re due for a playoff. Let’s hope for a bunched leaderboard late Sunday.

To-win: Mackenzie Hughes +2000. Though he missed the cut at the U.S. Open, his form prior to that was trending in the right direction with four top 15s in six starts. A T2 finish in the event in 2019 also inspires some confidence in the Canadian.

Top 10: Will Zalatoris +225. Though he isn’t a PGA Tour member yet, Zalatoris has all the makings of a future star. He leads the Korn Ferry Tour points list during this prolonged season and he’s coming off a T6 finish at the U.S. Open. I’d be highly surprised if this dead-eye ball striker isn’t in contention this week.

Prop: Winner’s 72nd hole score birdie or better +5000. Just throwing darts at the board here. Plus, I like these odds.

To-win: Pat Perez, +2,500. Even the faves this week don’t exactly inspire confidence, but “smart” money is on Perez, who’s coming off a top 10 at the Safeway two weeks ago and has more experience than much of this fresh-faced field.

Top 10: Patrick Rodgers, +550. Up-and-down year for the Stanford grad, but of late, more up than down, with six made-cuts in past seven starts.

Prop: Winning margin, three strokes, +600. If Bryson can win by six at Winged Foot, a victor can cruise home in the D.R. with a three-stroke cush.

To-win: Luke List, +4000. He won that Korn Ferry event at TPC Sawgrass a few months back. He probably won’t win here — but what if he does?!

Prop: Henrik Stenson to miss the cut, +200. I wish no ill on Sir Stenson but this seems very possible.