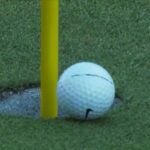 It is arguably the single greatest shot of Tiger Woods’ career. It is ensconced on the tapestry of Augusta National history. It may be the single most memorable call in 65 years of Masters broadcasts.

It is Woods’ boomeranging, physics-defying, awe-inspiring chip-in on No. 16 at the 2005 Masters. And here’s the kicker: you almost never saw it.

In the lead up to the Masters, CBS Sports has released a series of retrospective videos through the eyes of various figures in tournament history. On Wednesday, they spoke to Director Steve Milton, who recounted the story of how the dramatic conclusion to Tiger’s famed chip-in could have (and, in fact, should have) been missed by the television broadcast.

You’ve relived the moment hundreds, if not thousands of times. Tiger, clinging to a one-stroke lead, methodically measuring the contour of the green in front of him. After what feels like hours, he finally strikes his chip, stalking as it travels around the bend and toward the hole.

Suddenly, the ball is tracking. Woods and caddie Stevie Williams are chasing it to the flagstick. It rolls right up to the hole and … stops. They pause for a moment in disbelief, and it happens. Carried by momentum, sheer force of will, a well-timed stomp by Williams, the whispers of the golf gods, or perhaps all four, the ball falls into the hole. Tiger thrusts his first toward the sky and the crowd explodes, while Verne Lundquist adds, “Oh my goodness. In your LIFE have you ever seen anything like that?”

For millions of golf fans, that is the memory of Tiger Woods’ Masters miracle. When Milton thinks of the moment, though, he thinks of the nightmare that could have been.

As the director, it’s his job to select each camera angle the broadcast uses, and to relay those commands to the technical director, who executes them. In other words, it’s Milton’s job to know when it’s time to switch cameras.

As Tiger’s ball nestled near the hole, Milton made the executive decision to switch the angle from the ball to a close-up of Woods.

“I see the ball in the corner of my eye, what I think it’s doing is resting on the edge of the hole,” Milton said. “So I ask [technical director Norm Patterson] to take the 16 flank, the tight shot of Tiger. Tiger’s almost on his knees thinking the ball isn’t going to go in.”

He gave the order to Patterson, whose finger was hovering millimeters away from the button to switch camera angles.

“So now, I think we’re on Tiger,” Milton said. “I hear the roar, I look back over and I see the ball is gone and has fallen into the cup.”

“I think I was on the tight shot of Tiger when the ball went in, and that we had missed the entire moment,” he said.

But then he looked back at the monitor showing the feed millions were watching. It was still showing the hole.

Thanks to Patterson’s moment of hesitation, one of the great moments in Masters history had been captured perfectly. Crisis averted.

Of course, buoyed by the miraculous chip-in birdie, Tiger would hang on to win his fourth Masters. CBS, on the other hand, would be nominated for the Emmy for Outstanding Live Sports Special for their coverage, an honor owed to Woods, Lundquist, and technical director Norm Patterson.

“[Patterson] and Tiger created one of the most iconic moments in sports television history,” Milton said.