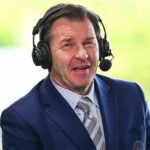 Nick Faldo announced his intention to retire from the CBS Golf booth, effective in August.

Sunday afternoons on CBS are about to sound different.

On Tuesday morning, longtime lead analyst Nick Faldo announced his intention to retire from the CBS Golf booth upon the completion of the PGA Tour season in August, ending a 16-year run with the network.

“I have come to the time that I am announcing my retirement from full-time broadcasting for CBS and the Golf Channel,” Faldo wrote in a statement published to his Twitter account. “After much consideration and discussions late last year with my business manager and more privately with my wife, Lindsay, we together included, and I decided that I will step down from Tower 18.”

In his release, Faldo says he came to the decision to retire before the start of the 2022 calendar year, informing CBS Sports chairman Sean McManus of his intentions before the AT&T Pebble Beach Pro-Am in January.

“I was surprised and a little sad about it, to be honest with you,” CBS Sports Chairman Sean McManus told GOLF.com Tuesday. “Nick’s been a powerful force for CBS Sports for 16 years. But I respected his decision.”

Faldo will be succeeded in the CBS booth by Trevor Immelman, a longtime analyst who has served on both CBS’s PGA Tour and major championship coverage.

“I’m excited about Trevor,” McManus said. “He’s a great team player. He has a definite perspective on the game of golf. His chemistry with the other members of the CBS Golf team has been remarkable. The game of golf is becoming more and more international, and I think his international pedigree helps a lot.”

According to McManus, CBS looked into a broad range of candidates to replace Faldo before deciding on Immelman — a decision that was supported by both Jim Nantz and lead producer Sellers Shy.

“We thought about everybody,” McManus said. “And every time we discussed somebody else, we kept coming back to the fact that Trevor is contemporary. He’s got a lot of energy. We really didn’t seriously consider anybody other than Trevor, but we did discuss a lot of people.”

There were many factors that brought CBS back to Immelman, but McManus said the recent disruption in professional golf was not one of them.

“No, this decision was made purely on what we believed would be best for CBS Sports’ golf coverage, and best for the viewer,” he said. “There were no other factors with respect to what’s going on in the golf world.”

For more than a decade, Faldo has been a mainstay of both CBS and Golf Channel’s coverage of professional golf, bringing life to the broadcast by drawing upon his experience as a six-time major champion. During that time, he called more than a dozen Masters — an event he won three times — from the 18th tower.

“Nick is a force of nature, both on camera and behind the camera. He has an enormous amount of integrity and standing in the golf industry,” McManus said. “I’m really going to miss him.”

Faldo said he was worn down by the demands of a full-time broadcasting schedule. Between his playing and broadcasting careers, the 64-year-old has been on the road for the better part of four decades.

“I am honored and humbled to have worked alongside all those in ‘The Team,’ which includes my good buddies ‘the guys’ in the now Super Tower,” Faldo said. “Leaving a full schedule of broadcasting will now provide me the ability to entertain other opportunities and partnerships.”

Faldo said that he and his wife have moved to Montana where they intend to live on the forthcoming “Faldo Farm.”