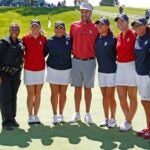 Bubba Watson has been a staple in the team room for the Americans at the Solheim Cup.

TOLEDO, Ohio — Bubba Watson is all over the place at Inverness Club this week. One second, he’s fetching divots in the fairway. The next, he’s hyping up Nelly Korda after sinking a clutch birdie putt. The players are having an unforgettable experience this week, and Watson is, too.

While the Tour Championship marches on in Atlanta, Watson found himself with a rare week off, as he failed to finish in the top 30 in the FedEx Cup standings. With some unexpected time on his hands, he saw it as a perfect opportunity to come to the Solheim Cup and help in any way he could.

With a wife who’s a former professional basketball player, and a six-year-old daughter getting into the game of golf, Watson made the decision to lead by example and invest in women’s golf. Coming to Inverness seemed like the best way he could do so.

“I called up Pat (Hurst) and said, ‘Can I be a part of this?’ and she said, ‘Yes!’” he told GOLF.com “It was a fit for my schedule and considering the girls that I knew.”

Since stepping on site earlier this week, Watson has made his presence felt. Whether it be helping caddies lug bags around or giving advice to players about the tricky shots around the greens, he’s been engaged throughout.

“He just wants to support women’s golf,” Hurst said. “It’s been great. He’s been a lot of fun having him in the locker room hearing his take on a lot of the things.”

On the 1st tee box Saturday morning, Amanda Balionis asked Watson his motivations for showing up this week. His answer got straight to the point.

“I think it’s important for the world to see that these girls have just as much talent, if not more, than we do,” he said.

He elaborated even more in a later interview with the Golf Channel.

Watson also sees this as an opportunity to use his platform to promote the premier event in women’s golf. He’s been active on social media posting about his experience at the Solheim Cup, and he hopes it will open some eyes to the special atmosphere around this event. If sponsors see this and decide to invest in the future, even better.

“It’s one thing to talk about helping women’s golf and women’s sports,” Watson said. “I don’t know how to help grow [women’s golf] without being here.”