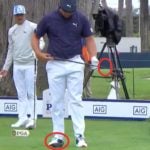 Bryson DeChambeau stares at his broken driver shaft Thursday at the PGA Championship.

You may be sick of hearing about Byrson DeChambeau’s monstrous drives and his lightning fast swing since the PGA Tour returned in June. But we just witnessed the highlight moment of the bulked-up Bryson Era on Thursday at the 2020 PGA Championship.

Playing the 7th hole in the first round at TPC Harding Park, DeChambeau smashed a drive so hard his driver shaft snapped completely in two. Well, sort of.

The 7th is a short par-4, playing only 340 yards in the opening round, and given DeChambeau’s ridiculous length off the tee, he immediately pulled driver and aimed for the putting surface.

After making his typically violent swipe at the ball, DeChambeau leaned on his club to balance while picking up his tee. But the 40 pounds the six-time Tour winner has added to his frame in the past year appeared to be too much for his driver shaft, which snapped beneath his weight just above the clubhead.

After staring in disbelief at his broken club, Bryson picked up the two pieces and walked down the fairway to his ball to prepare for his next shot, adding a few quips audible on the broadcast, “That was weird. Swinging too hard,” Bryson said with a laugh. He followed with, “”It was bound to break, I’ve been using it for a long time.”

Check out the rare moment below.

Fortunately for DeChambeau, he didn’t have to finish the day without a driver, thanks only to a recent USGA rule change allowing broken clubs to be replaced if they were not broken in anger, such as by slamming a club.

Bryson reportedly keeps two back-up drivers in his car, and three back-up shafts, so he was able to retrieve a replacement quickly and continue with his round.

By the way, whether or not the shaft was broken before his shot on 7, Bryson’s ball still traveled 296 yards, and he saved par in the end.

“It’s through wear and tear,” DeChambeau said after the round of the snapped shaft. “This material isn’t going to last forever, no matter how strong you make it, but that thing has lasted over a year swinging it over 200-mile-an-hour ball speeds. I’d say it’s done pretty dang well.”