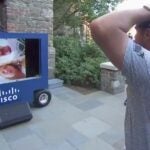 Bryson DeChambeau was overcome with emotion when he saw his family following his win.

In the Covid era, golf has altered the way it operates in a number of ways. Gone are the days of screaming fans filling giant grandstands, instead being sequestered to their couches for a premium viewing experience. And post-round handshakes? Those are a thing of the past.

But one of the most special traditions that has been cut is the winner’s family greeting them on the 18th green. Tiger Woods gave us perhaps the most memorable example of this when he embraced his family following his 2019 Masters win. If that moment had taken place in present times, it’d be impossible to replicate.

So when Bryson DeChambeau holed out in the long shadows of Winged Foot on Sunday to cap a monumental U.S. Open victory, there was something missing. There was no thunderous applause. The handshakes were replaced by fist bumps and his family was nowhere to be found.

Little did he know, however, he would soon see his family — through video. Thanks to Cisco Webex technology, DeChambeau’s family got to greet him as he exited the scoring area, much to the surprise of the champ.

As soon as he saw his parents on the video board, DeChambeau was overcome with emotion, tears welling in his eyes.

“Oh my gosh!” he exclaimed as he turned away from the screen to compose himself. “Hey Mom, hey Dad — I did it!”

For a player that tries so hard to be robotic — repeatable, mechanical, predictable — it can be easy to forget that DeChambeau is a person, after all. Though we may only get to see the bulked-up, Hulk-smashing world beater, there does exist a version of him that we can relate to — a human one.

“That was one of the coolest moments, seeing my parents on that screen,” DeChambeau said prior to his presser. “I did not expect that.

“My parents have given so much up for me” he continued. “I mean, there were times that I went to school without any lunch money, and we had to make bologna sandwiches and didn’t have anything to eat. We had some very, very difficult times, but every single day, they always wanted the best for me, and they always gave me the opportunity to go golf, go practice, and go get better.”

Though the “normal” post-round family greeting is surely preferable, this was the next best thing. And it’s a moment DeChambeau won’t soon forget.

“We talked about his parents not being here, but you know what, that was pretty cool,” NBC broadcaster Dan Hicks said.